Dawn of the Bats

I created this logo for Carlsbad Caverns National Park to promote their Dawn of the Bats special event! Millions of people have seen the spectacular out-flight of Brazilian free-tailed bats from the cavern's natural entrance in the evening. Much fewer have seen the awe-inspiring IN-FLIGHT, which takes place near the break of dawn. With a belly full of moths and beetles from the night's hunt, each bat, individually, rises high above the natural entrance, tucks her wings in and dives into the void at high speed. A loud cascade of VWOOSH sounds accompanies the dives--even a tiny animal can make a big noise if she swoops fast enough. Inside the cave, each mother bat will use sound, smell, and touch to locate her own pup and nurse him, converting the tasty insects into nutritious milk for the baby. The adult male bats, having only themselves to sustain, will probably get more sleep for the day. The next night, the adult bats will fly out again, while the babies stay clinging to the ceiling together in the "nursery" and peep back and forth, perhaps dreaming of the outside world which they have not yet come to know.

My logo will appear on the park's Facebook page, as well as fliers and advertisements for the special event. I wish good luck to the bats, rangers, and visitors at Carlsbad Caverns!


I produced the logo as an outside illustrator, not as a park employee, so the image is copyrighted to me and the park has permission to use it.
Posted by Ross Wood Studlar at 10:06 AM 2 comments: 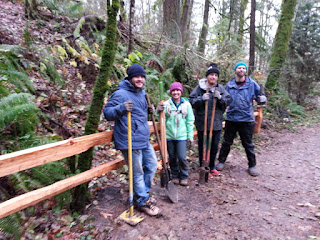 Since arriving in Portland, Oregon, I've been out for a few volunteer projects with Forest Park Conservancy, and also some with Friends of Trees. There's something magical about planting trees, or even ripping up wood ivy when it's needed, an intimacy with the earth and soil, not found by only tromping through the woods on a trail. I found especial reward in working with a team to build a fence (to close a "social trail.") From digging the holes to assembling the fence (which much resembles Lincoln logs for grown-ups) to tamping the soil into place to secure the posts--there's nothing like building something that you can come back to revisit decades later. (As I will keep coming back to a certain stone-pillared picnic table in Whitemoore Park in Morgantown, West Virginia--which was part of my Eagle project back in the day!) 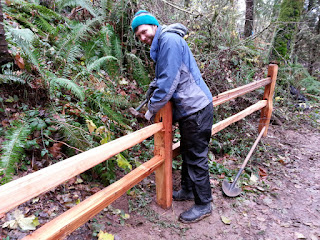 Wild animals are elusive. I have only seen a mountain lion one time in all my years of hiking in the woods, and they have probably seen me more times than I can count. In Norway, brown bears, having been extensively hunted, learned to avoid people. (Biologists even use the term "gun selection" to describe this behavior, which has also been observed in rhinoceros.) People presumed the bears extinct from many areas, until biologists gave it a thorough investigation, and found they yet lived. After this discovery, civilian eyewitnesses to the bears came forward to describe past events, apparently no longer deterred by prevailing wisdom. All over the United States and Canada, there are native peoples who believe that Sasquatch is not only a spiritual being, but a physical one as well. The Sasquatch hypothesis has gained more credibility in recent years, thanks efforts by anthropologist D. Jeff Meldrum, survival expert Les Stroud, and others. As happened with Norway's bears, civilian eyewitnesses to Sasquatch have come forward to describe their hard-to-explain experiences. Les Stroud has propounded the idea that if Sasquatch exist, they must be even smarter than big cats or bears. To have avoided confirmed detection for so long, they must have NEAR-HUMAN levels of intelligence. If Sasquatch is real, it could be cause for a loud new cry for conservation. It could provide not only moral grounds for forest preservation, but legal ones as well. The Endangered Species Act has long been one of the most powerful forces for protecting natural habitats--and it can only be applied to species whose existence has been confirmed.

What if Bigfoot is proved real? To gain some idea for how human society might react, it is wise to look at the past record. For hundreds of years, legend had it that there were "ape-men" in the forests of East Africa, with various Native tribespeople and European explorers telling stories of their close encounters. In 1902, German officer Robert von Beringe ventured deep into the jungles of Rwanda, and shot two of these simians. With type specimens in hand, biologists named the new species Gorilla beringei. They are more commonly known as mountain gorillas. Europeans generally mistook the peaceful herbivores for aggressive monsters. And, uncomfortably, these behemoths looked all-too-humanoid; they appeared to be "between man and beast." This discovery came at a time when Charles Darwin's revolutionary theory of evolution was still relatively new, and humanity still reeled from the blow to its collective ego--that scientific evidence led to the conclusion that we are animals descended from apes, instead of divine beings who stand apart from the rest of nature. Could the giant ape REALLY be our close relative? This question ignited a firestorm of debate in the newspapers and universities, which became known as the Gorilla war. Scientists and others weighed in, in a dispute focusing largely on the details of comparative anatomy, and representing the conflict between Darwinism and human exceptionalism. An American boy named Merian C. Cooper followed the Gorilla war. After he grew up and became an Airforce pilot and filmmaker, he became captivated by W. Douglas Burden's written account of his expedition to the island of Komodo, where he confirmed the existence of the "dragon lizards." Another mythic beast had turned out to be real! Drawing upon inspiration from these remarkable animals, Cooper conceived an idea for the ultimate adventure movie: African gorillas battle Komodo dragons, with a band of human explorers caught in the fray. He revised the idea to feature a single giant gorilla who would face off against both dinosaurs and men with guns, and fall for the charms of a beautiful woman. In 1933, Cooper co-wrote and co-directed the classic monster film King Kong, with stop motion maestro Willis O'Brien bringing the beasts to life.

Today, Kong is still a movie star, and field studies by Dian Fossey and others have revealed that real gorillas are among nature's gentlest giants, a far cry from the rampaging Kong. And the Gorilla War is forgotten. It is odd how quickly the cryptic "monsters" become normalized as animals once their existence is verified. The giant squid is a recent addition to the beasts of legend who have proven to be real. Perhaps some day, the Sasquatch will similarly be featured in Ranger Rick, Wikipedia, and the San Diego Zoo, and the fifty-year debate over the veracity of the Patterson-Gimlin film will be forgotten.

The name Sasquatch is a variation of sásq'ets, borrowed from the Halkomelem language. The name is often translated as "wild man of the woods," but a better translation is "wild master of the woods," (according to Les Stroud, as he learned from his "native teacher.")  Indeed, if the great hominid exists and has survived and evaded us for this long, he is a greater master of the woods than even the best human trackers and survivalists. His connection to earth far outclasses mine, but still I am still happy to be of service, in replanting small patches of the forests where he might thrive! 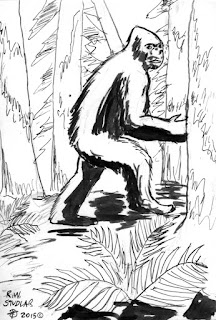 Recommended video: 10 Mythical Creatures that turned out to be real by Hybrid Librarian.
The Gorilla War is brought back to light by Monte Reel's recent book Between Man and Beast.
Artist unknown on the old gorilla image.
Kong vs. T.Rex image was used for promotional purposes by the now-defunct RKO pictures, and is used here for educational purposes only.
Posted by Ross Wood Studlar at 10:57 AM No comments: