Wind Cave Passages, including mine on safety and ferrets, in comics form!

My fellow Ranger at Wind Cave National Park, Matthew Chuvarsky, recently sent me the final PDF of this year's version of the visitor guide (park newspaper), ready to go to press. All of us seasonal interpreters labored heavily for this production; and the final product seems to shine (despite its destination on newsprint.) I will link to the paper when it becomes available. Matthew and fellow Ranger Amanda Hagerty designed and wrote most of the contents. I must applaud their clever layouts and techniques, such as  the alternating pattern of text and images found on page 3, the gallery of notable speleothems on page 4, and the condensation of a complicated schedule into a highly readable table on page 5. I contributed the draft version of the text for the "summer" section of page 3, and--more notably--the illustrations and comics, interpreting the safety rules and the plight of the black-footed ferrets (and the text on the ferrets as well.)  Features like this are not found in many National Park Service newspapers. I must consider this publication a success, and a victory for me in bringing comics into a new educational venue. Readers young and old connect with the simple iconography and sophisticated narrative power of the comics medium. It makes a fantastic medium for communicating about National Parks and public lands, whether to explain the rules for safety and park protection, or to tell the stories of animals and plants, and evoke a sense of empathy for these residents of the great preserves. Comics have been used before as educational and interpretive tools for land protection: Grand Canyon's nonprofit support organization gives out comics featuring the superheroes Chasm and the Eco Squad (who protect nature against polluters); I have seen comics about the wildlife in Yellowstone (details unknown); the Forest Service distributes comics about fire education starring Smokey Bear; and the National Oceanic and Atmospheric Administration (NOAA) has contracted comic strip character Mark Trail and his current author Jack Elrod to communicate about the impacts of global climate change (and how to survive the resultant extreme weather!) (Mark Trail's original creator, Ed Dodd, was a Park Ranger at Yellowstone, where he guided mule pack trips.) A state park in Texas featured a brilliant cartoon sign about why not to feed the animals....

...which probably had some influence on my illustrations for Wind Cave. Having said all of this, there is a great deal more that land preservation agencies and organizations can do with the comics medium; it's potential applications are as diverse as the life in an Amazon Rainforest.

And so, I present my humble contribution to the visitor guide of Wind Cave National Park.

This was my original final product: 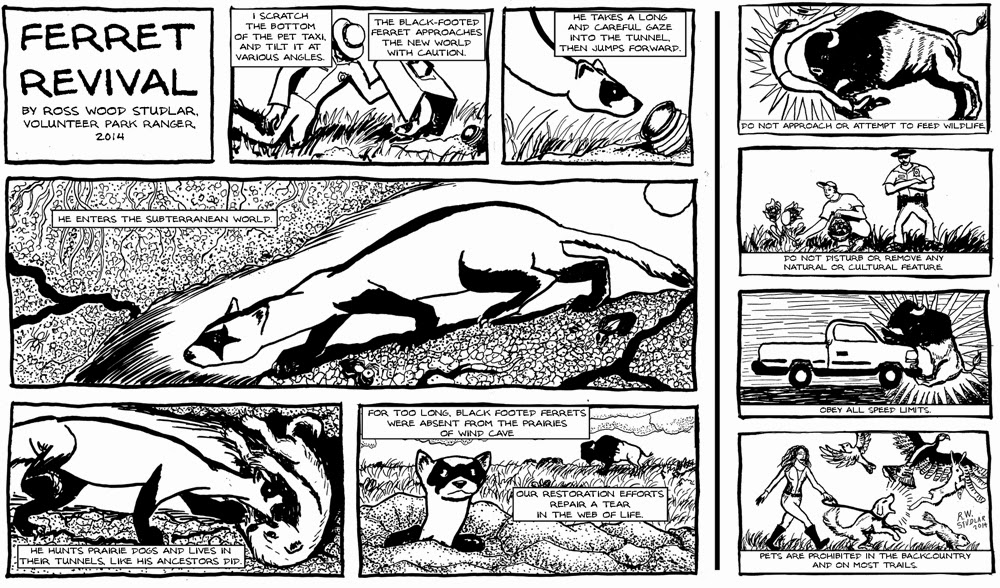 The park's Chief of Interpretation asked for some edits, some of which were carried out by Matthew after I departed the park. This is what finally appeared in the park newspaper: 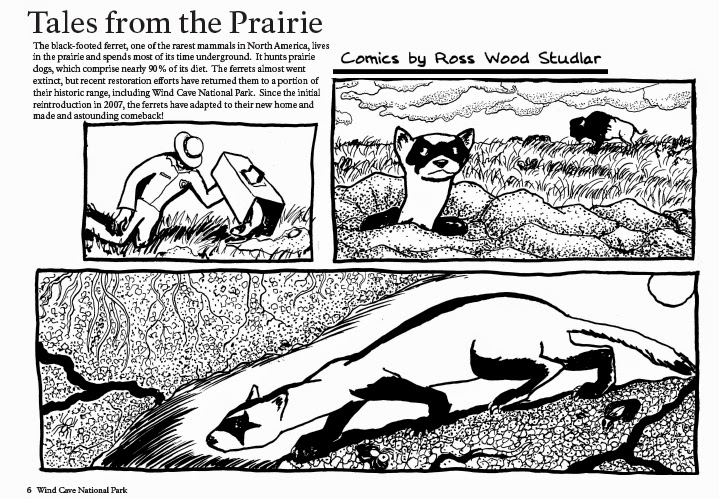 I gave this project my best and fullest effort. I am happy to be part of our Visitor Guide. To steal a line from a skillful and hardworking maintenance employee at Wind Cave, "I aim to serve."


NPS publication cartoons are not copyrighted.
Posted by Ross Wood Studlar at 8:49 AM No comments:

April 3, 2004--ten years ago today--was the date of my senior art symposium at Denison University. I shared the gallery with such luminary works as the paintings and prints of Harper Leich and the sculptures of Alison Johnson. I debuted A Humble Joy, my first published graphic narrative. I broke new ground, as the first-ever student at Denison to create a comic book as a senior project. Faculty mentor Ron Abram made it all possible. To celebrate, I have re-opened my etsy site, and posted a small number of copies of A Humble Joy for sale. Get 'em while they last. I'll sign 'em too. 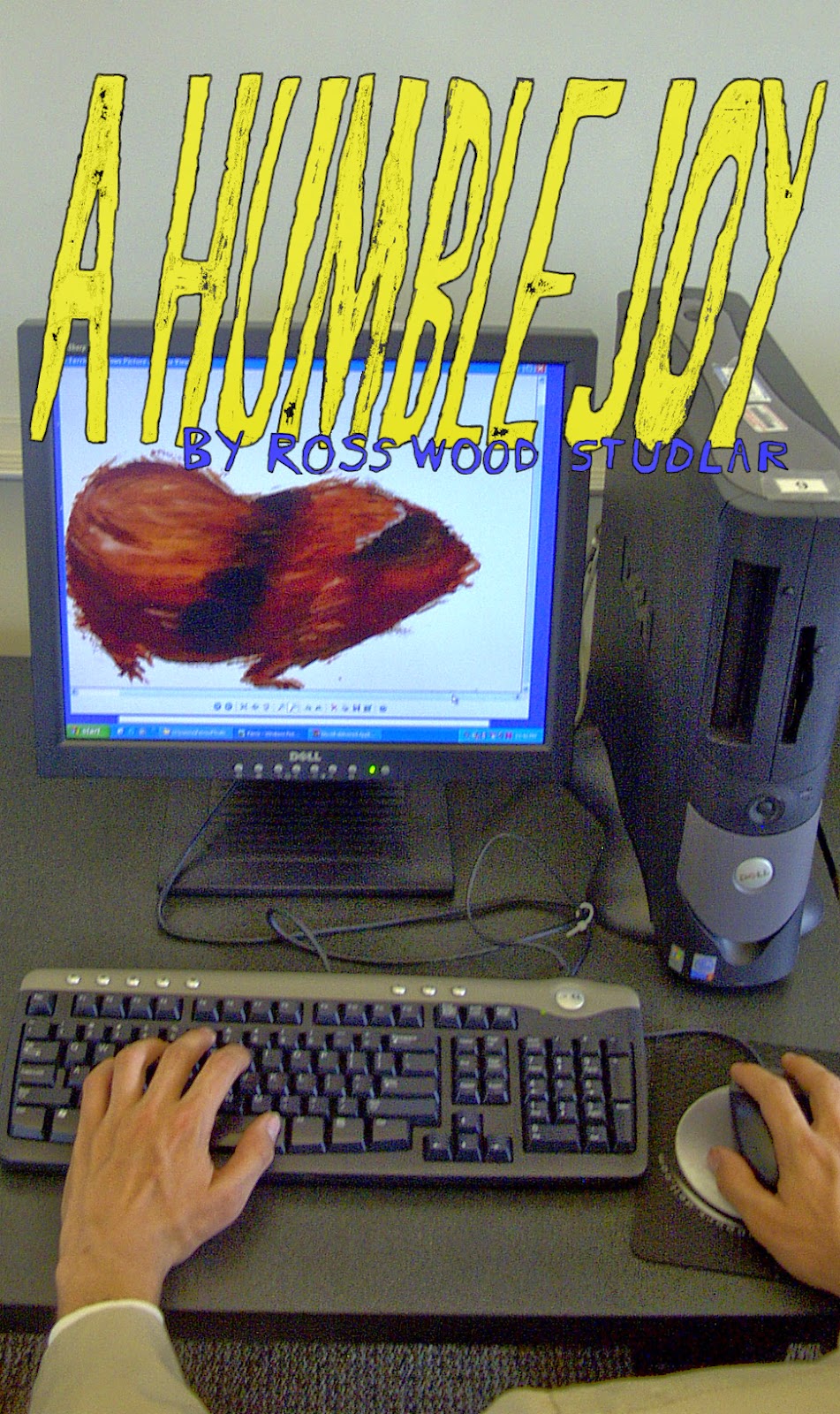 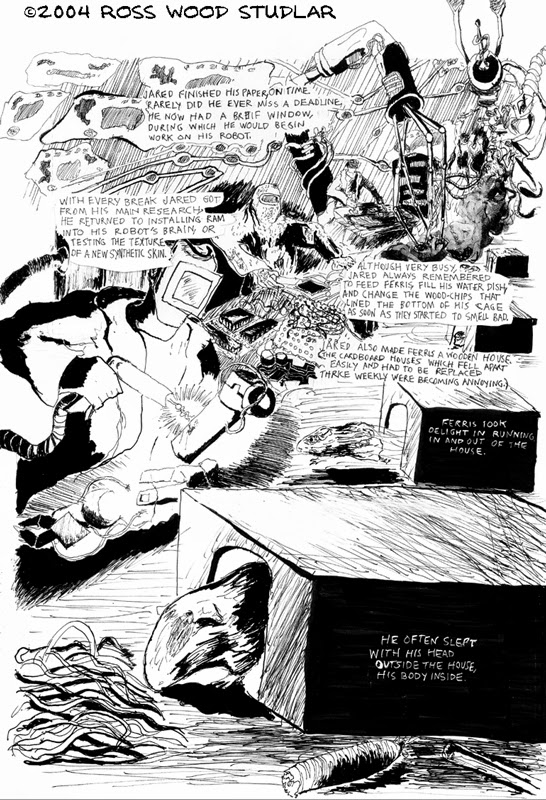 Front cover and interior artwork for A Humble Joy, 2004
Posted by Ross Wood Studlar at 9:57 AM No comments: