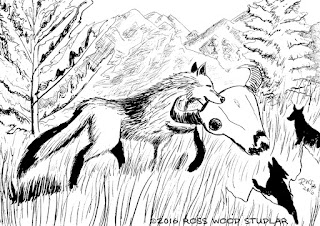 I am back to Park Ranger work at Yellowstone, this time at Norris Geyser Basin, in time for the centennial of the National Park Service (1916-2016)!

On an off-day last week, I awoke at 4:15 AM, and drove my Subaru across winding roads, past towers of steam and fields of grass and sage. The roads were mostly empty (too early for even the tour buses) and the sky turned from grey to pink to blue. My destination was Slough Creek, at the edge of Lamar Valley, where my contact Rick McIntyre waited, seated upon a stool behind a spotting scope, with crowds of wolf-watchers around him. Rick is a Biological Science Technician at Yellowstone, and has been out at the break of dawn to watch wolves and record their ways, seven days a week, for the past 16 years or so. I sought Rick’s wisdom in preparation for my evening program about Survival Stories from Yellowstone, which features, among others, Wolf 755M, now the alpha male of the Wapiti Pack in Hayden Valley, who has lived through hell and back. 755M and his mate the great huntress 06 had a den of pups in 2010, in the same location now occupied by newer generations. From our perch on the ridge, we not only spoke of the legends of elder wolves, but also watched the nascent lives of young wolves—legends in the making. We watched the den of the Junction Butte Pack. We saw their alpha male trot back to the den, with a bison skull in his jaws. Found on the plain, this skull would make a fine chew toy for his pups. We later saw a family reunion; canids young and old joyfully wagged their tails. We saw bison chase wolves, and wolves chase bison. No violence occurred, but the relationship between the great herbivores and carnivores is often tense. Wildlife biologist and wolf project director Doug Smith made an appearance at the overlook as well, and joined us in watching the unfolding story of the Junction Butte Pack through the scopes. With the den in clear view, we had a rare opportunity to see the wolves grow up, one that would prompt enthusiasts to travel around the world for a glimpse through the scopes. For me, it was a trip of one-and-a-half hours in the early morning, with a weary day to follow; even though I normally arise early, this trek challenged even my circadian rhythms!

(Of course, remember that I write this blog from the standpoint of a private citizen, who coincidentally happens to also work for the National Park Service.)
Posted by Ross Wood Studlar at 3:11 PM No comments: