CAVE Exodus, the freeing of a trapped Spider

It has been a trying winter at Carlsbad Caverns. We recently had a collective going away party for the last five seasonal rangers to go off to their new parks and new adventures. They asked us each to give an informal exit speech. Reluctantly, after urging from my peers, I stepped to the “podium.” A slightly-edited version of what I said:

“As you all know, my childhood hero was Spider-Man. I wanted to be Spider-Man: to scale sheer walls, to swing from webs, catapult myself from a web-slingshot, and kick-out villains with both feet. It never quite happened.

But when I arrived for work at Carlsbad Caverns for the first time in May 2013, I learned that my proving ground would be Spider Cave. I was nervous. I had been on one wild cave tour before, when I was twelve. That was long ago. Had I become claustrophobic? There was only one way to find out.

I emerged from Spider Cave covered in red dirt, having belly-crawled through the narrow passageways, with the red crusts of corrosion residue all over the walls, the ghostly calcite formations—the gnome and the Medusa room and the pirate ship. I emerged victorious—I had survived Spider Cave. Therefore, I must be a Spider-Man!

Later that summer, I delivered my first bat flight program, at the amphitheater overlooking the natural entrance to Carlsbad Cavern. I spoke of the Batman symbol and Native American stories of bats as heroes, and the heroic feats that real bats perform, such as keeping insect populations under control. And the bats emerged, the counterclockwise spiral cloud, which has graced our landscape in summer evenings for many millennia. The people watched in awed silence as the bats filled the purple sky. They flapped and whizzed around me, inches from my nose and 500 feet overhead. And so I was Batman.

At what other job do you get to be BOTH Spider-Man and Batman? 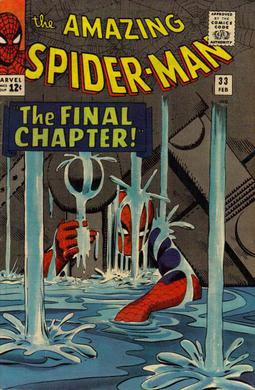 My favorite Spider-Man story was “If This Be My Destiny....!”, from the original 1960s run, by Steve Ditko and Stan Lee. This tale remains a classic, an influence and inspiration to generations of cartoonists and readers. After a battle with Doctor Octopus, Spidey has recovered a rare isotope needed to cure Aunt May from a deadly disease. But unfortunately, Spidey is pinned to the ground by a block of fallen machinery the size of a building. Cold water drips on his head and soaks his body. At first, he remembers his failures and gives up, and prepares to die alone under the crushing weight. Then he thinks of his family and all the people who need him, especially Aunt May. He musters the strength and will to lift the machine. You can feel the force and the power, as trembling with agony, he rises to his feet, hoists the titanic hunk of metal and casts it backward.

It reminds me of this winter season at Carlsbad Caverns. We went through 'breaking bat' and 'sewergate' and the rest. We faced broken water lines and broken sewers, and walked on iced-over pathways through winter gusts to reach the port-o-potties. We filled jugs with water in White City, and filled buckets from the trickle off the rooftops. We took hell from the powers that be over minutia and things not our fault. And, by strength of this family, this community, we still lifted the machine. We kept Carlsbad Caverns a world-class National Park. A pristine cave and home for bats, and an unforgettable experience for the people who visit. This victory is collective.

Whenever Tales of the Uncanny from About Comics comes out, look for a parody of the lifting scene, written and drawn by yours truly!

Posted by Ross Wood Studlar at 6:25 AM No comments: