Thor's Hammer and other Indelible Icons

Bryce Canyon National Park has filled me with awe and wonder, with its natural ampitheatre and hoodoos—sometimes they look like the turrets of an epic castle, striated in orange and white; sometimes like an army of stone soldiers, standing tall and in formation. In Pauite legend, they are people turned to stone by coyote for their evil deeds. In geology, they are the result of erosion of the Claron Limestone, primarily water that percolates then freezes (frost-wedging.) 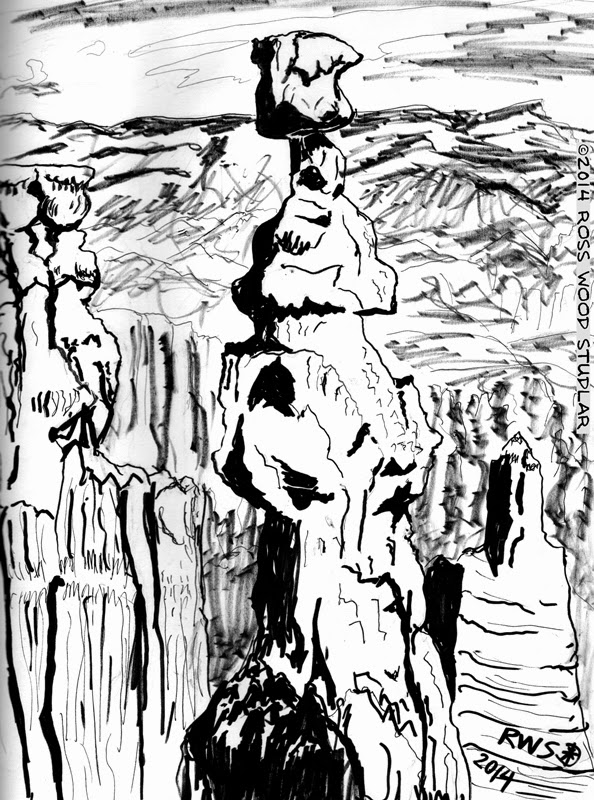 Not surprisingly, I became fixated on Thor's hammer, and wielded my brushes and brush pens and oil pastels to produce a few drawings. Yes, nature meets culture here for me, being that I thrilled to the adventures of the thunder god (especially Marvel's rendition) in my young days and my older ones. How appropriate that the first Thor comics epic I read was “The Flame, The Frost, and The Fury!” (issue #425, by Tom DeFalco and Ron Frenz) wherein the thunderer battles Sutur the Flame Demon and Ymir the Frost Giant to avert Ragnarok (the Norse apocalypse.) Plenty of flame, frost, and fury has shaped the landscape of Bryce Canyon! 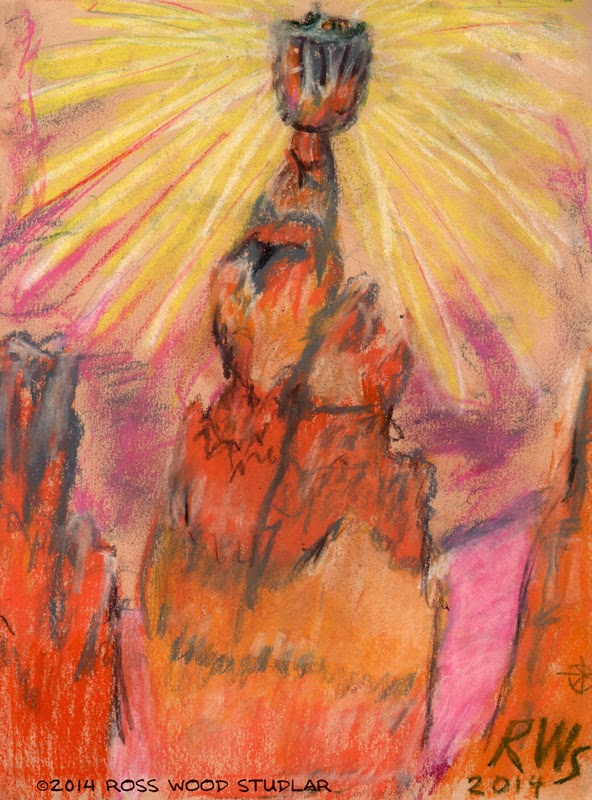 After bouts of drawing and hiking, I visited the Visitor Center, to discover Thor's hammer emblazoned on various post cards and posters and calendars and tote bags. The icon of Bryce Canyon!

Most National Parks have their icons, and normally it is some object with a very distinctive shape. At Timpanogos Cave National Monument (where I worked last summer) that honor belongs to the Great Heart of Timpanogos. Park visitors' preoccupation with the Heart was sometimes a source of frustration for some of my fellow rangers, because although the Heart is majestic, it is a large stalactite, similar to ones found in many other limestone caves. The truly exceptional feature of Timpanogos Cave is its Helictites—very few other caves in the world have them in such number and diversity. The greatest concentration of these is found in the Chimes Chamber; they resemble worms of snakes, and their growth seems to defy gravity. Whatever the merits of the helictites, the Heart's iconic shape has a way of cementing itself in the longitudinal memory of the average visitor, above all other cave features, save the darkness (according to an informal survey.) 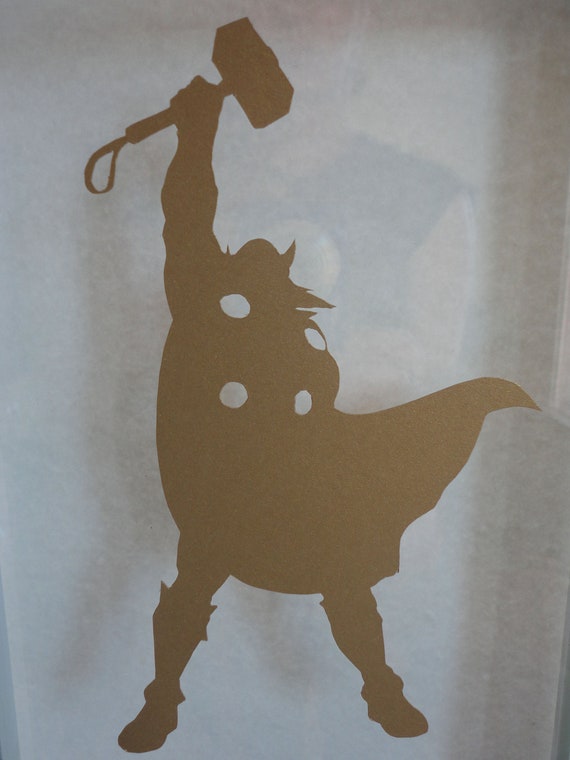 Iconic shapes—objects unmistakable in silhouette—must occupy a deep and potent place within our imaginations, perhaps even amygdalas, reinforced by millions of years of evolution and survival. (I wrote about this previously in my post “Silhouettes and Night Encounters.”) Religions have their icons, such as the cross for Christians and the circle for many American Indian belief systems. Many of the most successful characters in comics and animated cartoons have a distinctive shape—Batman, Wolverine, Popeye, Betty Boop, Bart Simpson, Dick Tracy, Calvin and Hobbes, etc. These characters are unmistakable in silhouette—just like the famed icons of the National Park system! These include the Sequoia tree, the Bison, Old Faithful, Wizard Island, Mount Rainier, Delicate Arch, the Three Patriarchs, etc. The park ranger in a flat hat is an iconic character too. I strongly suspect that these ink drawings, ancient rocks, and uniformed public servants all tap into the same deep recesses in our brain. Outlines are all-important to how we see the world—what camouflage does is break up an animal's outline, so they are seldom seen. And so the recognition and memory of distinctive outlines with certain characters or features must have been fundamental to our survival, whether to stay away from a lurking lion or to navigate by sun, moon, and landmarks.

And so I sat on the Navajo Loop trail, and tried to depict every crag and crust and ridge of Thor's hammer, my hands caked in ink and graphite, my jeans covered in gray limey soil. The clouds moved past in the deep blue sky behind the red rocks. Tourists came by, most photographed the hammer, and some photographed me at work as well. To me, the hammer meant power and dominion over the sky and storms. I couldn't help but imagine the sky turned to black, and lighting blasts sent from the hammer, to blast away flying saucer invaders to our world! 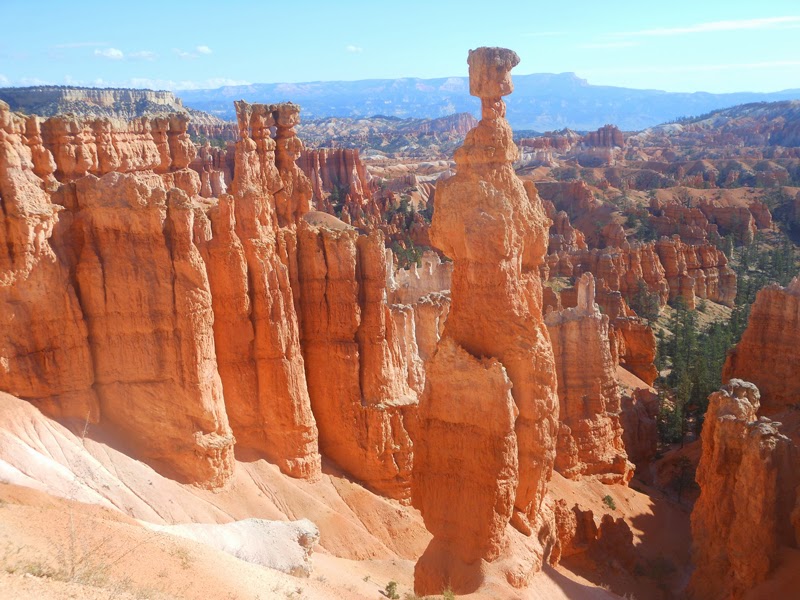 Thor (superhero) is trademarked to Marvel Comics. Low-resolution image (as designed by Myriah Hankins--unsure of original artist) is used here for educational purposes only.
Posted by Ross Wood Studlar at 7:06 PM No comments:

The Forest Between the Caves

On the border between Laos and Vietnam, there is a cave so large that it can comfortably hold a city block, with 40-story skyscrapers. Inside the cave there is a forgotten forest, full of hitherto undiscovered forms of life. I must marvel at a forest in cave.

In between my jobs at caves of the U.S. National Park system (yes I have been rehired for Carlsbad Caverns for the winter!), I have ventured back to Oregon, to reunite with my ol' friend Lesley and the evergreen forests. So we can call it a forest between caves, from my perspective. Oregon has come to feel like a home of sorts, having worked multiple seasons at Crater Lake National Park (some of them alongside Lesley), and traveled along winding roads to through bucolic lands, and to the coasts, where waves crash and seals bask in the sun. America is still a nation of wilderness (although it is vanishing right as we speak), and Oregon carries grand examples. 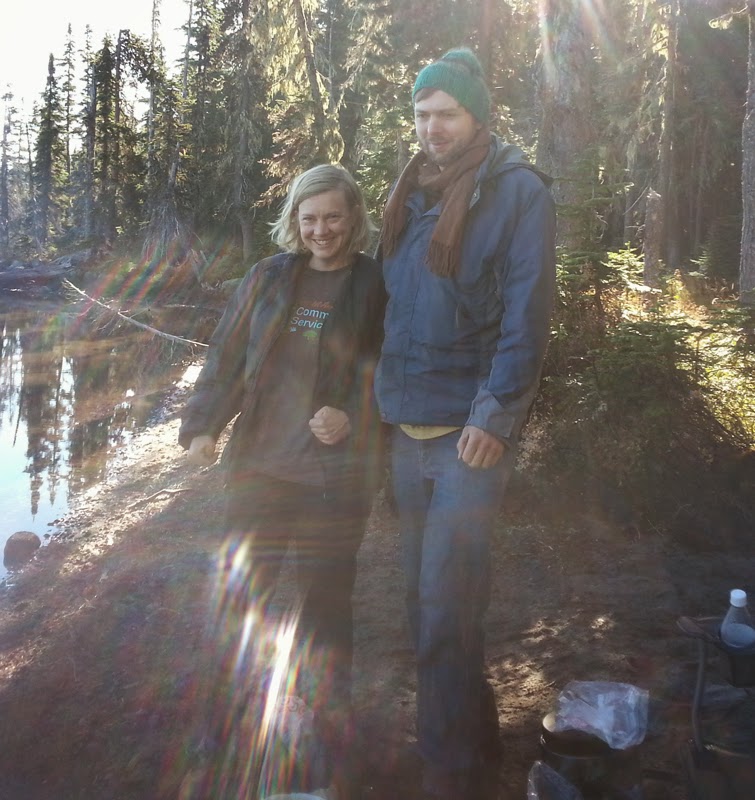 Two weekends ago, Lesley and I visited Summit Lake in Deschutes National Forest, alongside her Tsonga comrades Jamie and Eli. Lesley lives like a true Homestead type, and drives like one too, with an old manual-transimission Toyota. It was late and dark when we ventured to the wilderness, along country roads (which had been paved for logging trucks) most of the way. Until we came to the final stretch, a road of rocks and pits. The vehicle bumped a boulder and got stuck. A figure with a flashlight came towards us from among the trees. As luck would have it, it was Eli. We were hung up only 150 yards from the campsite! We shouldered our gear, and walked the rest of the way. Once camp was set up, we returned to the site and jacked up the car, so it wouldn't rest on the rocks. Lesley had a scheme to build ramps of rocks and brush under the wheels and back the vehicle up and off its stone entrapment. I thought we should call triple-A (which I alone among our group had) but we would first have to go somewhere with a cell phone signal, a long drive perhaps.

I awoke and emerged from my sleeping bag at dawn, and crept softly from the tent, leaving Lesley to her rest. I scurried to the woods to dig a hole and use it for excretion. I found a one stick good for stabbing soil and another for scooping, and leaned them by the big tree at the campsite entrance for re-use. 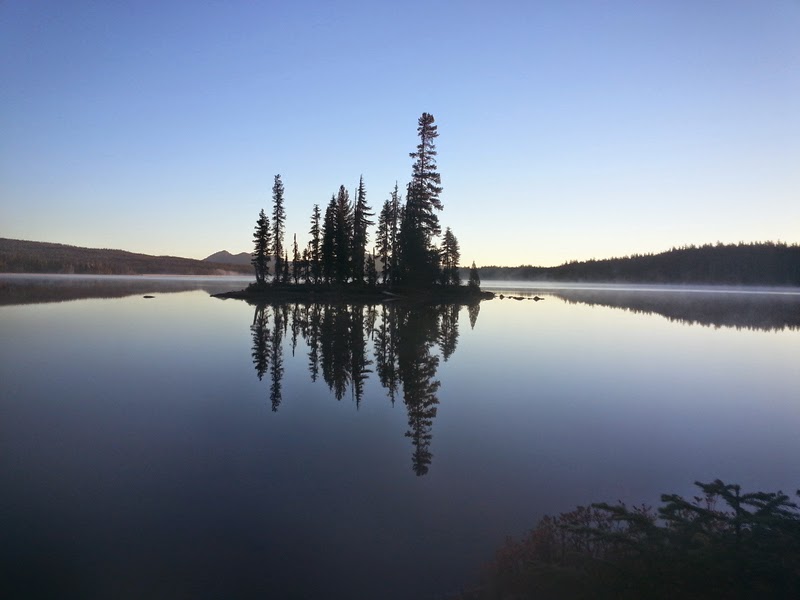 Summit Lake at dawn sported blues to almost rival Crater Lake, and silhouetted trees, and exuded mist and more mist. Eli also got up early, and when a large pickup truck rumbled down the bumpy road, he seized the opportunity and waved them down. A father and son hunting team, in insulated flannel shirts, were happy to assist with our predicament. They strapped their truck to Lesley's Toyota, of which Eli took the driver's seat, and steered from neutral. Their big engine roared forward and pulled the little Toyota backward, and it was free from the rock. Then I returned to my project of making morning tea, first searching for the various components (stove, pots, tea bags etc) from various places in the two vehicles, and gathering water from the lake to boil. Tea, or anything else, is warmer and better when it takes work to create.

Running by our campsite was a stretch of the Pacific Crest Trail. We followed it for a ways, and then entered the bush. Eli was psyched for an off-trail bush-wacking hike to end in a secluded lake, and Lesley shared the enthusiasm. I was a little reluctant, but did carry a high quality compass, and Lesley brought a topographic map. I also made sure to pack warm clothes and firestarters and a surplus of granola bars, in case we found ourselves in a survival situation. Off we went, among hemlocks and spruces, past piles of bear skat, and weird mushrooms and fungi. Surrounded by trees, and then more trees, and more. It would be an awful place to get lost, with no stream to follow, and no mountaintop views of the landscape as a whole.

We didn't find the lake we sought, and so made a meadow, the site of a seasonal pond probably, our destination. The grass and moss was soft on bare feet, and rejuvenating to the soul. Like Swamp-Thing, I felt that I might regrow my body from out of the earth, and re-emerge in whole. Jamie hadn't trained enough for the hike, and was a trifle sore and ready to turn around after the meadow. Also, we should haul back before dark, and so we left the lakes undiscovered, for now. 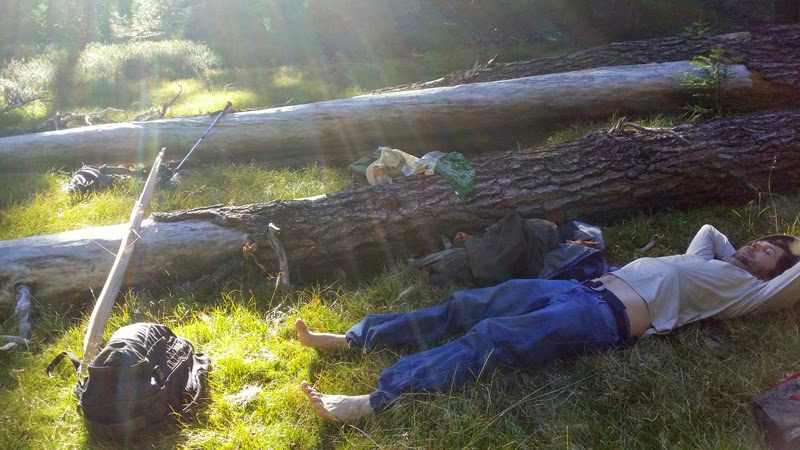 It was a winding trip back, walking across logs and through prickly brush. The compasses kept us on an approximately straight line, and we kept watch of our topographic position. I kept expecting to see trail around the next bend, and we kept walking through more trees. The process continued for miles. Finally, to set feet back on the trail was a welcome relief. The trail felt like a familiar small town, the mark of civilization. We had experience some wild and raw nature; I would tell Tom Brown Jr. that I am learning. 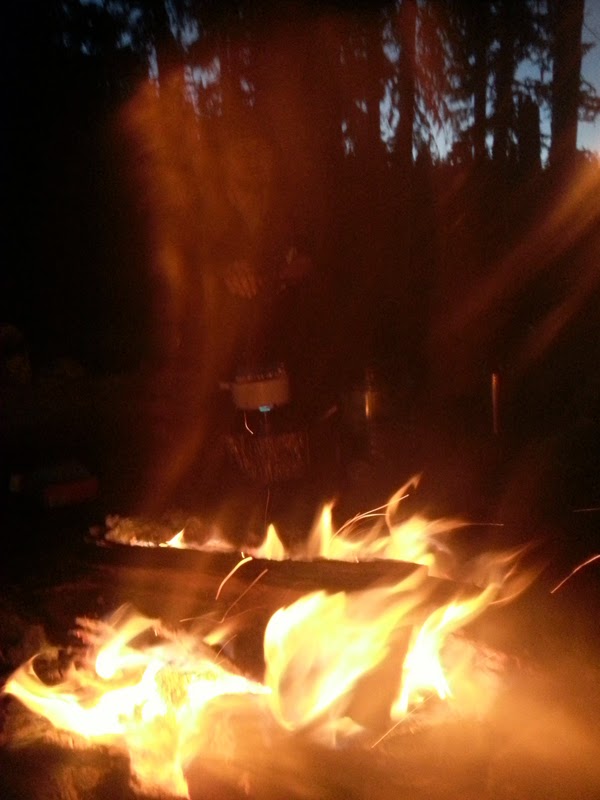 That night, we made a campfire on a peninsula, and cooked and ate a blessed mixture of pasta, tomato sauce, potatoes, cheese, and vegetarian chili. The potatoes baked in classic fashion in aluminum foil on the coals, and removing them while facing the heat took the full combined efforts of Lesley and Eli. We joked and laughed and told survival stories. I was sorry to leave the wilderness the next day, but carried the memory of life in its pure form, in touch with the earth, with all senses engaged, where one must use one's hands and wits to stay alive. Maybe next time I'll reduce my amount of high tech camping equipment, and feel the wilderness in greater purity. But when I return to caves, my assortment of headlamps and flashlights--aka 'golden sticks'--will be indispensable. 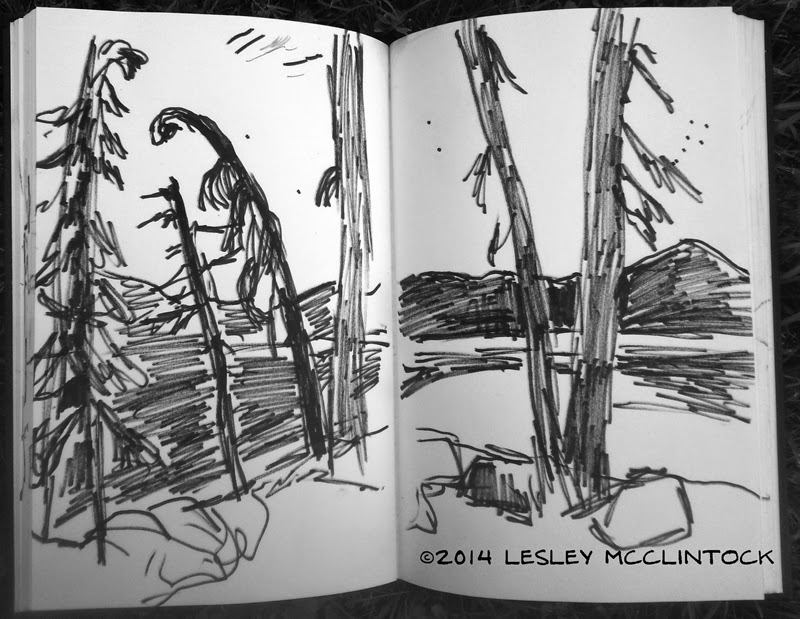 Image Credits:
'Ross and Lesley' and 'Ross in Grass' by Eliahu Naftali
'Fire' and sketch of the nighttime trees by Lesley McClintock
'Summit Lake at Dawn' by Ross Wood Studlar
© to respective creators.
Posted by Ross Wood Studlar at 6:48 PM No comments: