In the darkness, a pallid bat hears the sound of crawling legs.  The bat swoops in to face dangerous prey. The scorpion does not yield easily, and stings repeatedly, even after being snatched in the bat's jaws. Unaffected by the stings, the bat enjoys a hearty meal. It remains mysterious how this small mammal can be immune to the scorpion's potent venom. Pallid bats inhabit much of the western United States, including Carlsbad Caverns National Park.

Posted by Ross Wood Studlar at 8:09 AM No comments:

In recent travels with my parents, I experienced more of the great state of New Mexico—the state which looks and feels like the set of a science fiction movie. I'll have more to say about the otherworldly frontiers of the land of enchantment soon. For now, I'll share a piece of my own science fiction art, inspired by New Mexican artifacts.

At Three Rivers Petroglyph Site, near to Alamogordo, the rocky hills are docrated with more than 21,000 glyphs, chiseled into stone by the Jornada Mogollon people, between 600 and 1100 years ago. The images feature birds, insects, mammals, humans, circular symbols, abstract geometric patterns, and animals with geometric patterns on their bodies. A trail winds through the gallery of stones, and gives us a rare and up close view of the mysterious artwork. So many centuries hence, it is hard to know the meanings of images—archeologists and others can make but educated guesses. 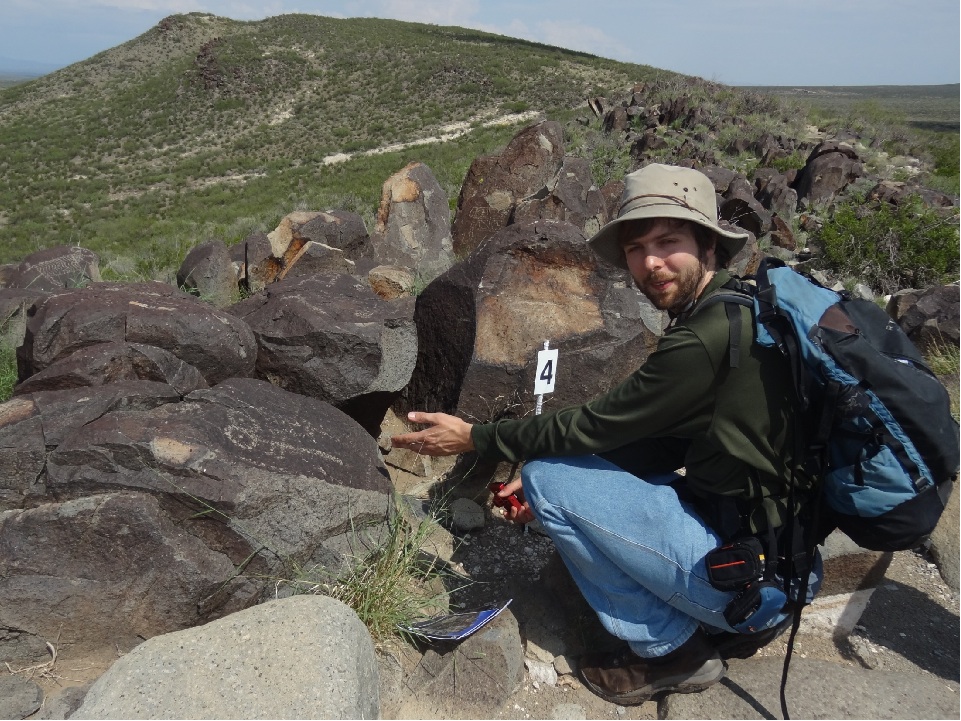 We observed a bug-eyed creature, etched in the stone. We speculated that it was a record of humankind's first contact with aliens, centuries before the Roswell incident. I imagined what such an event might look like, and recorded this dream in my sketchbook.

UPDATE on previous post: After the rainstorm, the mighty thunderhead of bats rose from the cave. Evidently, the rains brought out more insects, and brought more bats from other regions for a stay over in our bat cave, just as the inns in Portland become crowded with travellers when a convention on local organic food takes place. Unfortunately for us, the additional bats didn't stay at our cave for long, and we have returned to a small but captivating nightly exodus of bats.


CURRENT EXHIBITION: On August 10 and 11, I am exhibiting at Portland Zine Symposium (Oregon), alongside fellow artist Lesley McClintock! I shall exhibit and sell my comic books Frog Stories, The Raven and the Crayfish, and others, as well as posters (Thunderbird!) Lesley shall offer prints, illustrations, and paintings, taking inspiration from Crater Lake and the forests of the Pacific Northwest. It shall also be great to see my comrades Chris Seigel and Nolan Calisch of Wealth Underground Farm!