Photos from the American Serengeti 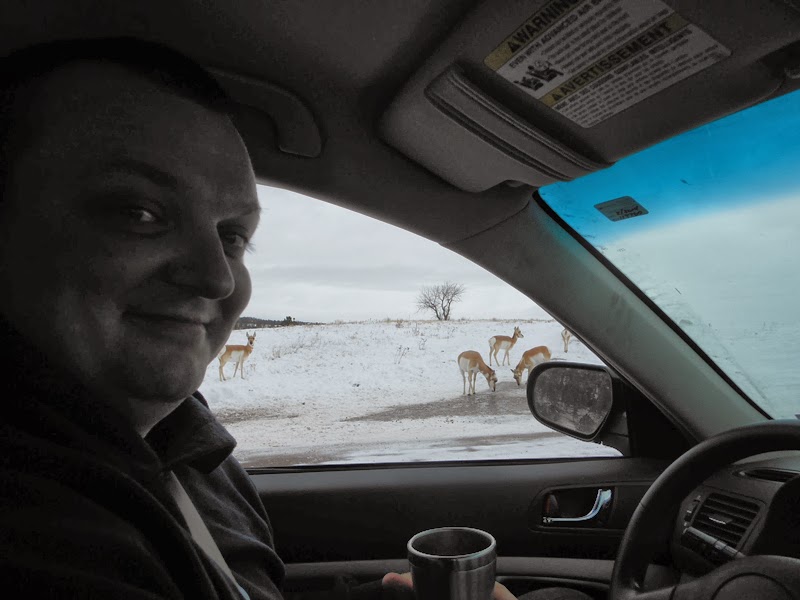 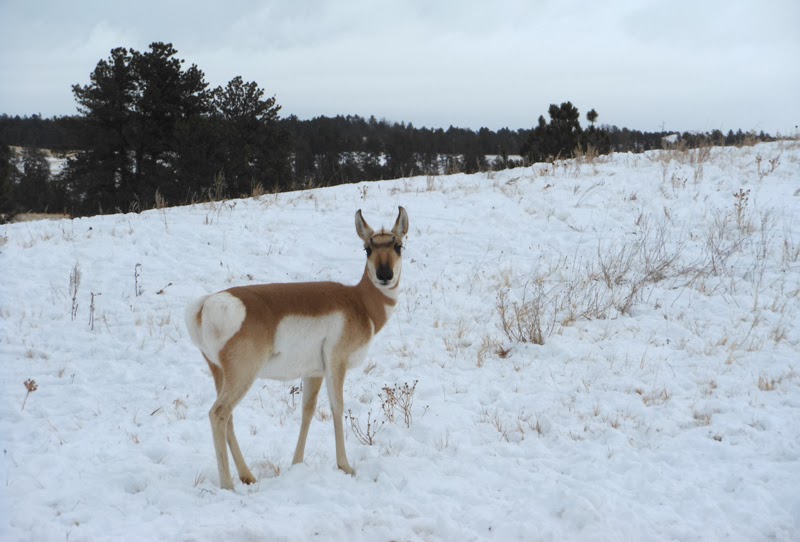 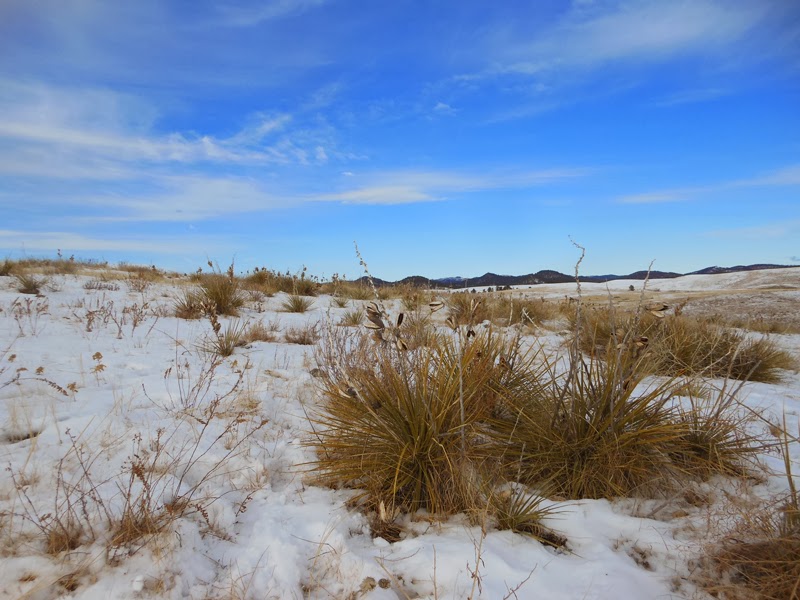 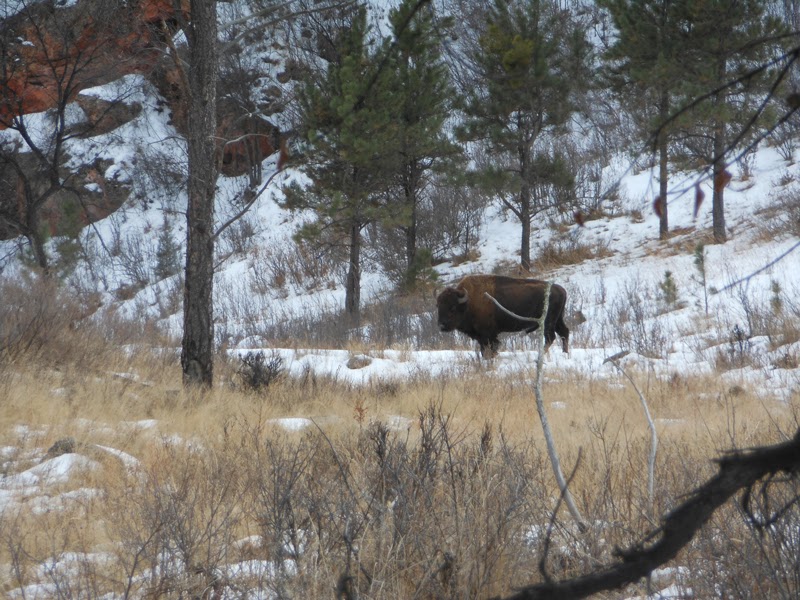 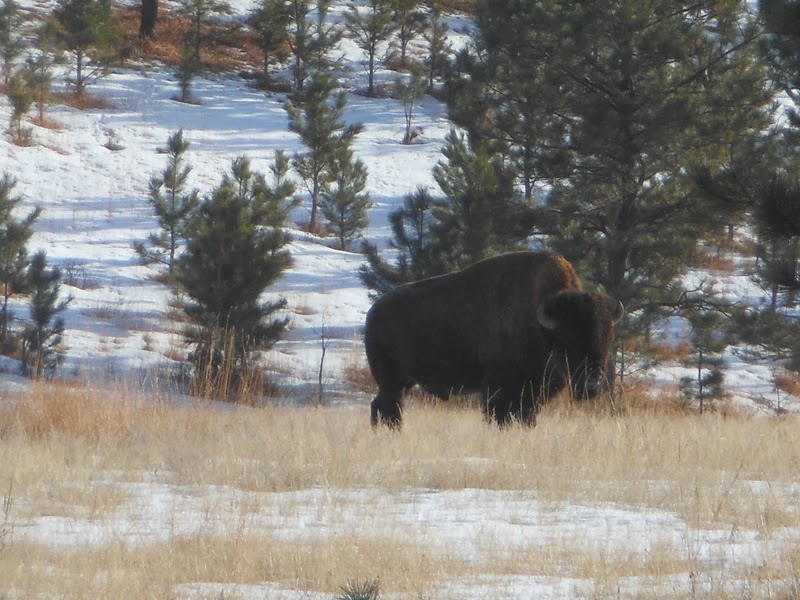 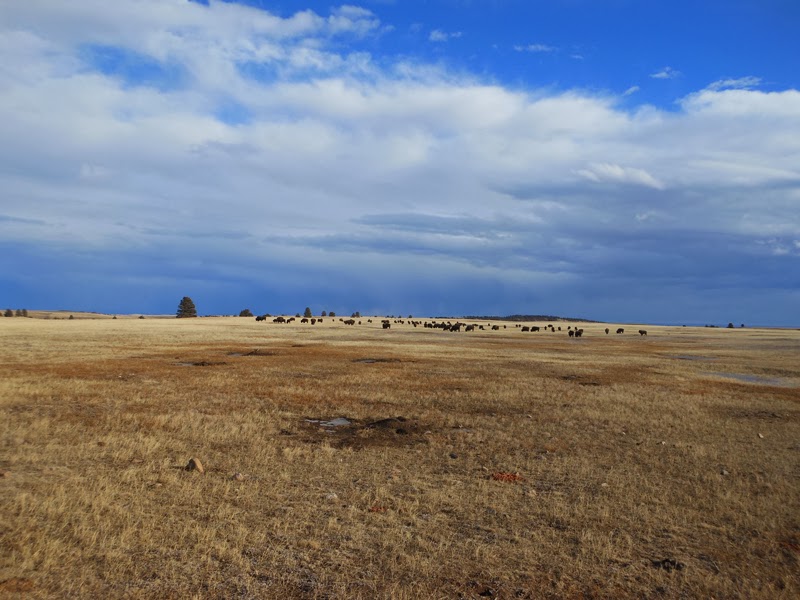 When Lewis and Clark came west (early 1800's), they found oceans of grass, populated by legions of bison, as well as large numbers of pronghorns, elk, wolves, and grizzly bears. When artist and writer George Catlin journeyed into this landscape (1830's), and lived as guest among multiple tribes of American Indians, to draw and record their ways of life, he proposed the creation of a "Nation's Park" to protect the grand environment and its inhabitants. (And as far as we know, Catlin was the first person to propose the concept of a National Park, the originator of "America's Best Idea.") Later, the prairie became the American Serengeti, a popular safari destination for Europeans. After guns, trains, and imperialism had their way, the landscape was not the same. Wind Cave National Park preserves small remnants of the grand prairie, with some key actors (such as bison and black-footed ferrets) restored, while others (such as wolves and bears) are still missing. To restore more of this great world, larger public parks are needed.


(Topmost photo stars my big bro Carl. Third photo stars the Yucca Glauca, one of the most versatile plants used by native peoples. You probably recognize the bison and pronghorns.)
Posted by Ross Wood Studlar at 10:16 AM No comments:

Survival Tip #1: Know the Sun for Navigation and Life

To give this blog more practical aspects, I will periodically include survival tips within my entries, beginning with this one.

This morning, I awoke just in time for a glorious sunrise over the rolling prairie out my east-facing window; the landscape cast in pink and purple and blue, interrupted by a few shining white lights of a distant semi-truck rumbling over a distant highway. Now the sun streams in, gives light to the room, and fuel to the lettuce which grows in plastic clamshell containers in the windowsill.

The sun gives many things, including direction for navigation. Although we have all heard vague statements about using the sun as a compass, I recently learned how to use it effectively (combined with an analog wristwatch), thanks to a promotional mailing from Backpacker magazine. (I subsequently found that this technique is described in many places, including Bradford Angier's How to Stay Alive in the Woods, and various youtube videos.)

How to use a dial watch for a compass


I am in the growing minority of people who wear analog watches on the wrist. But if your clock is a mobile phone or a digital watch, you're still not stuck. You can draw a traditional clock (in the soil with a stick if necessary) with hour hand pointing at the sun, and employ the same technique as listed above. Or you can use another available dial as a makeshift clock (as Dave Canterbury did in the "Split Up" episode of the television show Dual Survival, using his digital watch and the pressure gauge from his parachute.) Of course, exercise caution when looking at the sun!

On my past several hikes, I have applied the watch-as-compass technique, and quickly became confident enough to keep my magnetic compass hidden in my jacket pocket, while watch and sun (plus map) showed me direction. In so doing, I discovered a remarkable added benefit—I was tracking the sun in ways that I hadn't before. I developed an awareness of its daily trek across the sky, the tiniest hint of the awareness known by the ancient peoples who built the great houses of Chaco Culture National Historical Park, and calibrated their structures to the seasonal movements of the sun and moon and stars.

For most of human prehistory and history, people have turned to the heavens for navigation and the keeping of time. Many American Indians use the term “with the sun” where I use the term “clockwise”—for the sun moves clockwise on its daily trek from east to south to west. The television series Longitude (based on the book by Dava Sobel) informed me that the original purpose for the invention of the watch was navigation at sea, with the difference between time on the ship and time at the home port being key to determining longtitude. As Sobel describes it: “Every day at sea, when the navigator resets his ship's clock to local noon when the sun reaches its highest point in the sky, and then consults the home port clock, every hour's discrepancy between them translates into another fifteen degrees of longitude.”

Radiolab's Time episode informed me that, in the United States in 1850, time varied in every location, based on the sun. Every town had its own twelve noon, based on when the sun reached its daily zenith. (Additionally, there was no single official clock, and so one person's 9:00 was as valid as the next one's 9:20.) Railroads pushed to make time become standardized, because different clocks led to missed trains. Some towns protested standard time, seeing it as a threat to individual identity. But the railroads won out. Eventually, the Standard Time Act of 1918 made standardized time and timezones the law of the land. Since then, the average American has become more estranged from the sun, as its necessity for timekeeping and navigation has diminished.

And yet, we would be wise to reconnect with Father Sun. For a greener and more sustainable world, it is essential. The Homestead at Denison University introduced me to passive solar building design: the south-facing windows of my old Cabin One trap sunlight in the winter to warm the structure. In the summer, the sun makes a higher arc, and its rays shine through the windows less directly. Similar windows are employed in the strawbale Cabin Bob and earthship Cabin Pheonix, and the superb insulation of straw and soil keeps the structures warm in the winter, cool in the summer. All Homestead buildings face south, the direction of maximum sunlight, and capitalize on some form of passive solar design for winter heat. Sadly, most buildings in America do not. Passive solar could keep millions on barrells of oil in the ground, reduce global warming, and save on costs. And it is but one example of the wonders we will achieve, if we come to know the sun.

Posted by Ross Wood Studlar at 10:14 AM No comments: