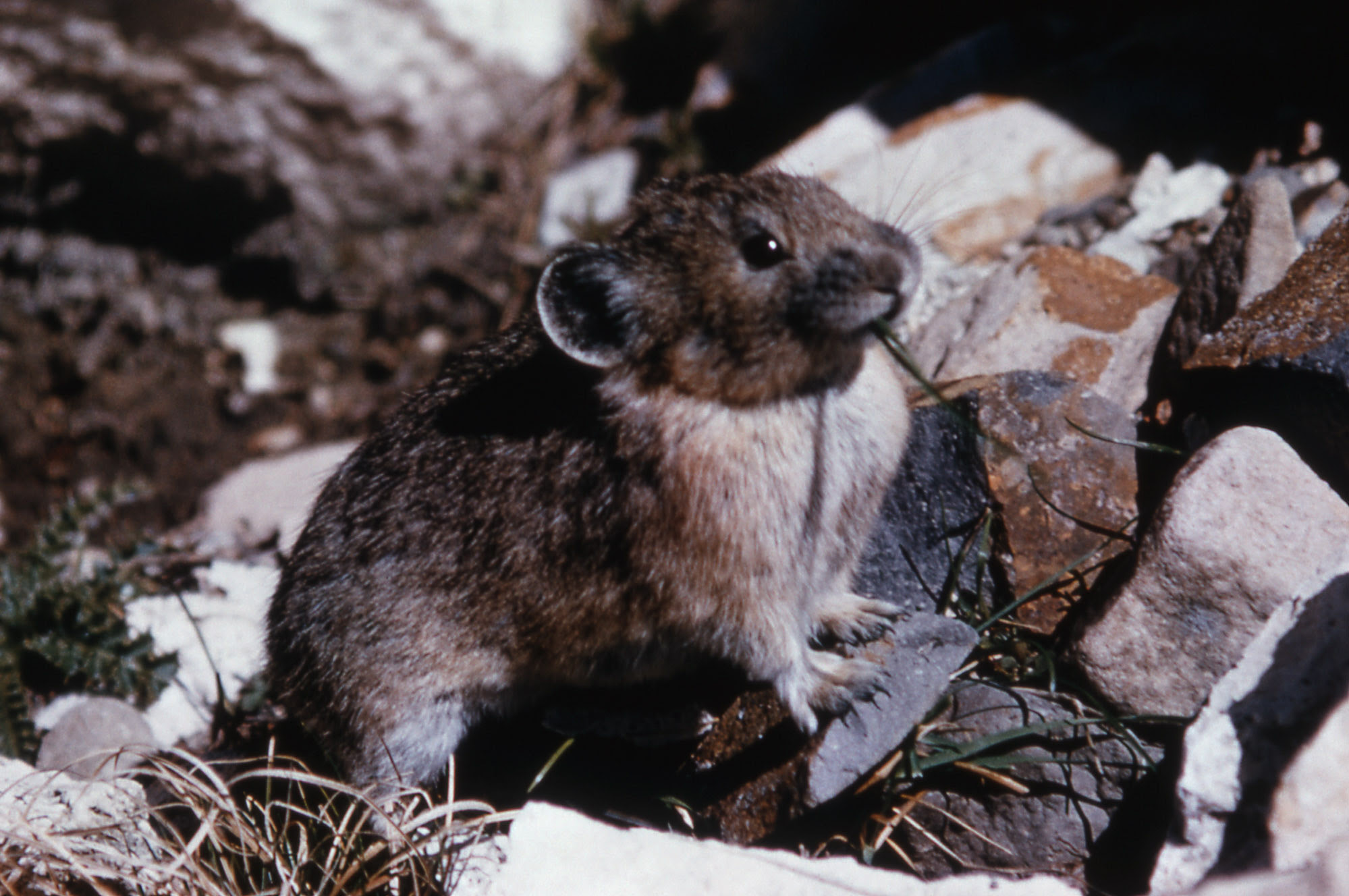 Pika eating grass, photographer unknown, 1964
Ever since the white men arrived on the scene, the giant crayfish beast has not been seen around Crater Lake. Could this be because the white men don't believe in the monster?

However, plenty of ordinary crayfish inhabit the lake. And yet, no crayfish has ever been found in any stream within the park boundaries. How can that be? One might suspect that white man introduced the crayfish. Then again, we must recall that the Klamath people told stories about crayfish (normal-sized as well as giant) that probably predate the white man by centuries. They called the crayfish “the children of Llao.” Llao was the spirit who inhabited the lake.

Whether native or introduced, the crayfish seem to be doing well these days. Not all the wildlife is so lucky. The pika, a mountain-dwelling cousin of rabbits, is threatened by global warming. These cute little fellows can't tolerate heat—78 degrees Fahrenheit can kill them. In recent years, pikas have been ascending higher into the mountains, trying to escape the rising heat. It's like rising floodwaters—or rising flames. I produced this drawing as a tribute to our imperiled furry friend:

I saw pikas from time to time at Crater Lake. More commonly, I heard their loud and high “eenk” call. Big noise for a small critter.
Posted by Ross Wood Studlar at 6:06 PM 1 comment:

Native Americans of Southern Oregon tell ancient legends about a monstrous crayfish, the guardian of the Crater Lake. He was known to snatch unwary intruders from the rim, and drag them to grisly fate in the blue depths. Another artist's impression....

The Raven and the Crayfish

Coming so very soon.... THE RAVEN AND THE CRAYFISH: A HITHERTO UNDISCOVERED LEGEND FROM THE PACIFIC NORTHWEST !

Posted by Ross Wood Studlar at 6:31 PM No comments:

My computer crashed, but it was backed up, so no big data loss. Even so, I'll have to get reorganized. I'll be back in a week.
Posted by Ross Wood Studlar at 7:20 PM No comments:

Evelyn Wood Moyle, my grandmother, died on January 3rd, 2010. She was ninety-five years old. My parents and I were visiting Grandma's house in Excelsior, Minnesota, for the holidays. Our stay has been longer than anticipated, with the unexpected turn of events. Now, all four of Evelyn Moyle's offspring are here. She also has nine grandchildren, and three great-grandchildren (and three more that are due later this year). Yesterday, the family members here hosted a commemorative gathering for her friends. We took turns telling stories and sharing memories of the much-loved denizen of Lake Minnetonka. For my part, I shared an open letter to the big man...

I propose that the property of 4690 Lynwood Circle, Excelscior, Minnesota, the former residence of Evelyn Wood Moyle, be designated as Grandma's House National Monument. This designation is well in accordance with The National Park Service mission of protecting “unimpaired... natural and cultural resources ... for the enjoyment, education, and inspiration of this and future generations.” Grandma's house preserves 100 years of culture and its environs are habitat for many wild species. I received enjoyment, education, and inspiration from my visits, in my youth and adulthood. Present and future generations should share the opportunity.

The area of Lake Minnetonka has four distinct seasons, giving us something new to experience, and something to look forward to, at all times of year. When the summer heat blazes, one can swim in the cool waters of the lake. Or sit under the shade of the cottonwood tree, or go to the front porch, where a cool breeze seems always to blow through. There, one can curl in the swing chair and read NATIONAL GEOGRAPHIC or NATURAL HISTORY. Or one can go cast a line from the neighbor's dock, and reel in one sunfish after another. One can paddle a canoe to big island, or to Glick's point and back. Or walk down the rail trail and ingest a healthy volume of blackberries. When the autumn chill is in the air, one can sit by the fire and admire the many layers of birthday cards on the mantle and shelves. Winter affords walks to big island across a lake of ice and sparkling snow. The spring brings the bright greetings or anemones and pasqueflowers.

The yard has provided nesting habitat to birds including redheaded and pileated woodpecker, starling, house sparrow, and kestrel. Bald eagles nest nearby, and are known to occasionally drop live turtles onto the roof. Native and edible plants populate the garden, and so do a host of invertebrates, notably ambush bugs, ladybird beetles, and ants. Inside, a cat controls populations of rodents, and assures that soft chairs do not retain their external fabric for long.

The house's historical artifacts include real silver spoons (150 years old, saved for special occasions) and decades of correspondence, some even from Moyle/ Wood ancestors on the front lines of the Civil War. The house also contains a treasury of old and new photos, illustrating how much life has changed since 1914. The house could be a site for historical reenactments of Moyle family events. A concessionaire could arrange for historic meals, modeled after those prepared by Evelyn Moyle, and shared with family and friends. These would include breakfasts of cinnamon bread and orange marmalade and cantaloupe with lime, as well as lunches of toasted english muffins with cheese. Evening meals should feature fresh-made cole slaw, fresh-baked rolls and potatoes, and such high energy dishes as chicken wrapped in bacon, or roasted ham.

Grandma could be commemorated by photos and audio-recordings, with copies for sale by the Natural History Association. Those who knew her recall her cheerful demeanor and positive outlook in the face of all adversity, her devotion to family and to natural history, and her ability to constantly make new friends, across her 95 years of life. It would be wise for future generations to follow her example.

Thank you for considering my proposal, Mr President. I look forward to hearing from you.


*******
Footnote: Evelyn Moyle also leaves behind some notable naturalist writings and photos. Her narrative "The Battle for the Cottonwood" was recently republished in the anthology OUR NECK OF THE WOODS, edited by by Daniel J. Philippon. NORTHLAND WILDFLOWERS, which she co-created with her late husband John B. Moyle, remains a popular and good-selling field guide.


Coming soon to this blog... info on my new comic THE RAVEN AND THE CRAYFISH... !
Posted by Ross Wood Studlar at 9:03 PM No comments: