The Library and the Festival of Comics and Zines

I own a grand collection of public library cards, even if they are not all kept or displayed in one place. They are scattered throughout varied sock drawers and suitcases, new and old wallets, on my person, in my car, and in my old bedroom at my parents' house back in West Virginia. In my many temporary residences, in Texas, Massachusetts, Vermont, New Mexico, Utah, Washington, South Dakota, Pennsylvania, etc etc, I have made my sojourn to the local temple of worldly knowledge. My public library card for Klamath Falls, Oregon, is the one of which I am proudest. Because NO ONE ELSE whom I worked with at Crater Lake National Park knew we had borrowing privileges at said bibliotheca. We were 75 minutes drive away from the town of Klamath Falls (off in the mountain woods), but still had residences with a Klamath County zip code, and so I went to the library and  affirmed that the delights on the shelves were mine to take home for a while. I check out books and comic books of many types, as well as audiobooks, music CDs, sometimes DVDs. As I have said many times before, and will say many times again, FREE and LEGAL is an awesome combination. My father has joked that I am the biggest supporter of the public library system since Ray Bradbury. I contend that that honor rightfully belongs to Neil Gaiman. Read his impassioned speech about the vital importance of libraries, fantasy, and imagination, and then go support a public library near you!

With my bibliophilic inclinations, I was honored to find the opportunity to exhibit and sell my creative works at Alt Press Fest—an annual convention of self-publishers of comics, books, zines, letterpress cards, and all else—hosted by the The City Library (of Salt Lake City)! There are many expos and symposia for self-publishers today. Normally, if an American city is large enough to have professional sports teams, then it has some sort of annual zine or comics fest, or multiple ones in hotbed areas like Portland, Oregon. However, this was the first such fest I have yet heard of to be hosted by a public library. It seems like a grand union. Two of America's greatest purveyors of free speech and free thought (libraries and self-publishing) have at last teamed up. Apart from the festival, The SLC library also has a large and permanent collection of small-press comic books and zines. I'll admit that I am impressed. A shout goes out to Brooke Young for organizing the event! 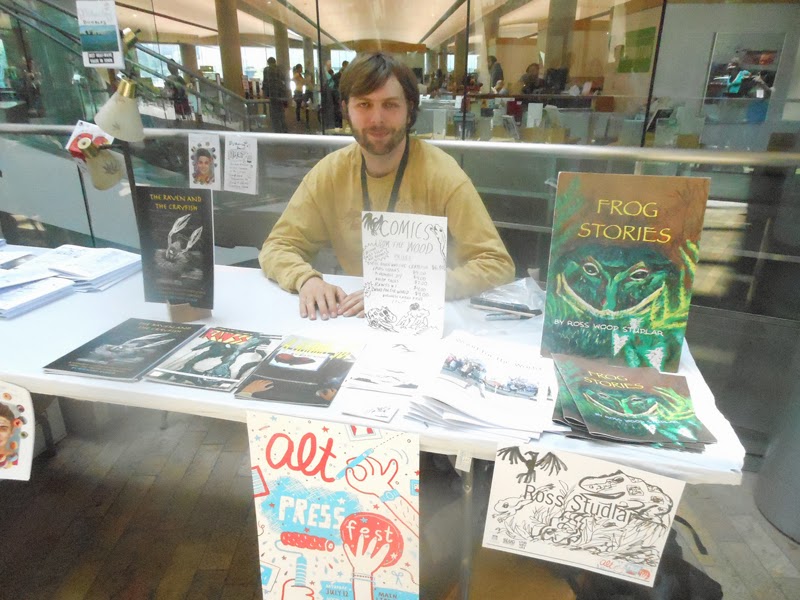 And so I sold my varied comic books, with their frogs and monsters, guinea pigs and robots. I tabled right next to the front door, and so had the incidental honor of introducing the whole fair to many a perplexed passerby, who had planned a quiet visit to the library, only to enounter a big splash of ponies and superheroes and typewriters and rainbows. I had some nice discussions with my assigned table-mate, Steve Anderson. He and I had both worked in recycling centers—and he created a zine based upon the experience, including found objects from within the bins. Evidently, one person's recycling really is another's treasure. I recommend buying Steve's zines someplace on etsy (which I haven't yet found.)

For the Alt Press event, I debuted a new zine called Wood for the World. I call this one a zine because it contains more prose than comics. It contains stories which are pro-environment and anti-imperialist. I must note that its contents have previously appeared online, either in the archives of this blog or on cartoonstudies.org/studlar/. Nonetheless, if you are like me and my new comrade Steve, and have a unique attachment to the wonders of print, then head over to my etsy site, and buy your copy of Wood for the World! 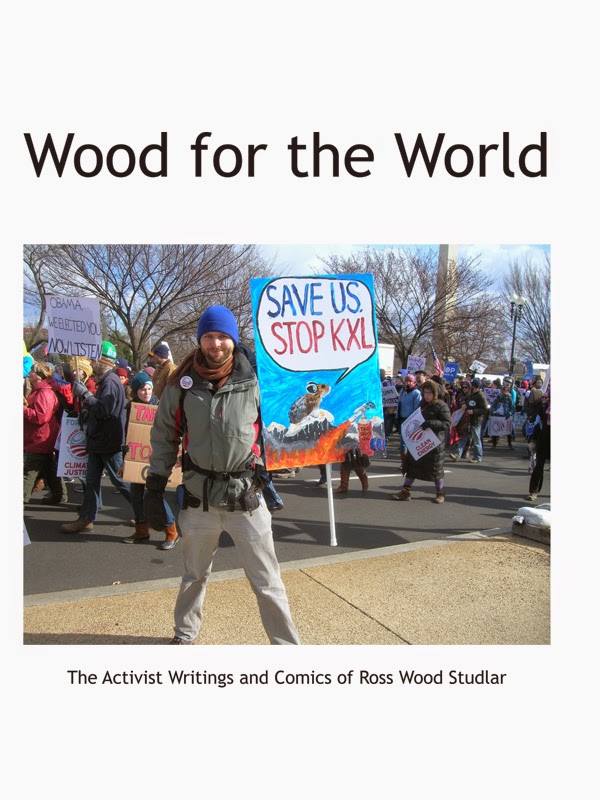 Contents of Wood for the World: Gag cartoons on war and global warming, comic "The Supreme Law," prose narratives "United Against the Midgard Pipeline" and "The Quest for Mountain Justice", illustrations including "The Unlucky Pika" and "The Midgard Serpent."


And thanks to Steve for the photo of me at my table.
Posted by Ross Wood Studlar at 2:40 PM No comments:

Occupy, V, and The Supreme Law

Upon the shelves of Night Flight Comics in Salt Lake City, I spied a graphic anthology called Occupy Comics. It contained subversive political stories, about or related to the Occupy movement, by famous and rising cartoonists. It also contained the essay “Buster Brown and the Barricades” by Alan Moore. Not surprisingly, the best comic book writer in the world (whose avenging anti-hero V—co-created with David Lloyd—has become a world-recognized symbol of uprising and resistance) can also give us unique education about the history and sociology of the medium. Among many other insights, Alan revealed the origin of the word “cartoon:” In the politically volatile 17th-century Italy, muckrakers took to drawing satirical images of political figures on the sides of carboard boxes—which were called cartons. Soon the images were known by the same name as the containers which acted as the poor man's canvas. From early on, cartoons were a way to communicate revolutionary ideas to the masses. In the 18th century, cheap paper became more widely available, and cartoons moved into broader distribution, and more refined art and writing techniques—but kept much of their incendiary spirit.

Inspired by this retrospective on the subversive art, and the new set of tales for the 99%, I brought forward an idea from my cerebral back-burner. A two-page story from a disillusioned fan of science fiction literature and Isaac Asimov's positronic robots, who recently saw Jeremy Scahill's provocative documentary film Dirty Wars. Perhaps the Fleischer brothers were there first—the “Mechanical Monsters” of this 1940s Superman animated cartoon bear an eerie resemblance to modern drones (and I must credit my mother for pointing this out when I showed her said cartoon.) Wendell Berry said: “FOR A NATION TO BE, in the truest sense, patriotic, its citizens must love their land with a knowing, intelligent,sustaining, and protective love.”... “And they must not allow their patriotism to be degraded to a mere loyalty to symbols or any present set of officials.” And so, in the patriotic spirit of July, I present “The Supreme Law.” 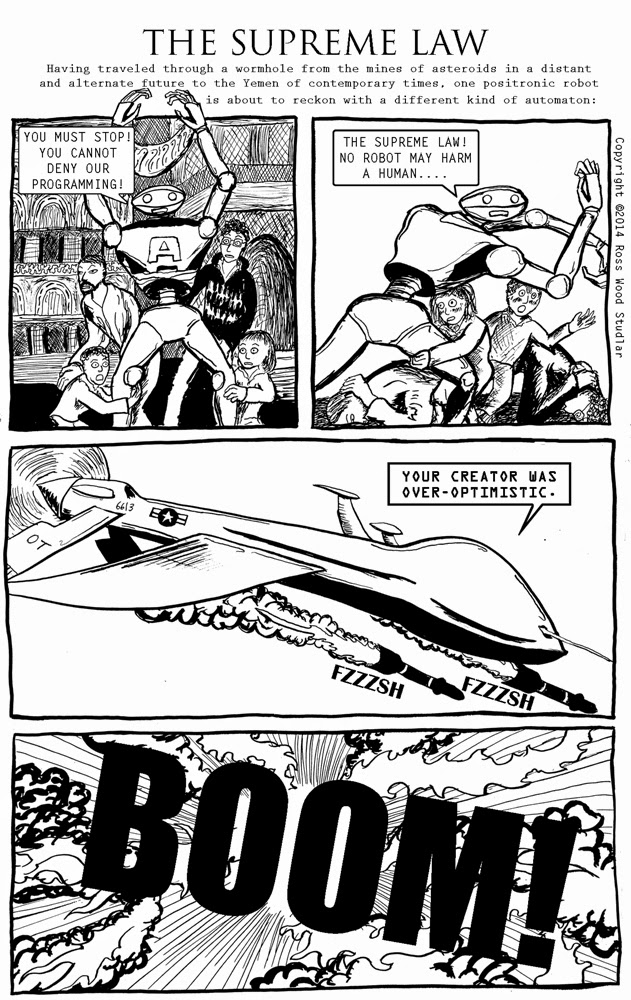 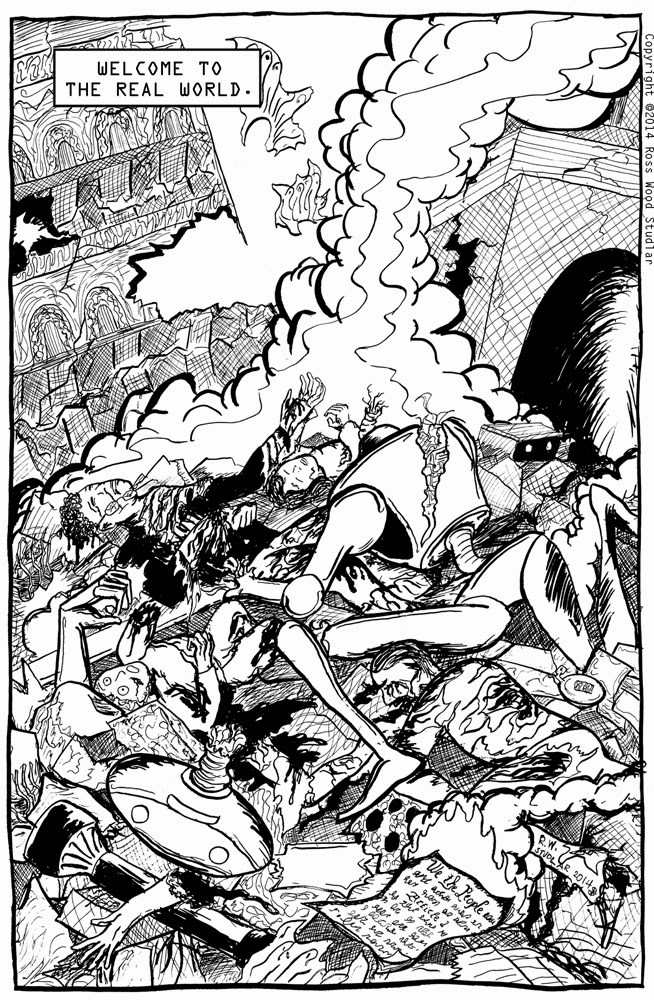 Top: Reuters photo of protestors in Bangkok, Thailand, with homemade versions of the V mask, used here for educational purposes only.
Posted by Ross Wood Studlar at 7:38 PM No comments: