For this drawing, I took some influence from Japanese giant monster movies.

The nuclear situation in Japan remains frightening, as does the threat of a similar event in the US. The bone-chilling guitar riff from Black Sabbath's “Electric Funeral” plays repeatedly in my head.

Since my previous post, I have learned some new things about our unsafe reactors. According to Dr. Ira Helfand, The U.S. nuclear plant most vulnerable to earthquake damage is not in California, but Indian Point, 27 miles north of New York City—with a population of over 20 million within a 50 mile radius. Where or how that population could evacuate in a meltdown crisis is an open question. For more on nuclear power and why it is not good energy policy, consult this thoroughly-researched blog by the U.S. PIRGs.

Meanwhile, wind farms in Japan were unscathed by the earthquake. Remarkable.

Tectonic and climactic forces have ravaged our cities multiple times in recent years. And repeatedly demonstrated our unpreparedness for such events.

I have experienced the destructive power of weather firsthand. In 2008, I lived on Galveston Island, Texas, and worked for an environmental education organization there. In September, Hurricane Ike struck. Prior to the storm's arrival, I evacuated to a Houston. I and several other employees and relatives of the director rode it out in an upper floor apartment. I spent the day before the storm frantically gathering and preparing all the supplies I could—gasoline, batteries, emergency phone charger, radio, water, more water, canned food, rubber boots, etc. The night of the storm, I was alternately asleep and awake, as I listened to wind and rain pummel the building—first from one side, then the other. The sturdy brick structure absorbed the weather's assault. The next day, we were without electricity. The building quickly overheated, being designed for air conditioning. Neighbors gathered for a grill-fest of the meat in their fridges—we had to eat it before the bacteria set to work seriously on that task, making the stuff foul-smelling and unpalatable. We gathered around battery-powered radios and listened to weather updates (and audiobooks). I stood in a long line to collect my allocated food and water from FEMA. Driving in Houston became even more hazardous than usual, in the absence of functional traffic lights.

I returned to Galveston after the storm, to move myself out, and to help the organization recover. I found a devastated island. I learned about the dangers brought on by a storm surge.

An excerpt from an email that I sent to friends about the situation on September 26, 2008 (slightly edited):

“I have made my exit from Galveston Texas. I hid safely in Houston during the storm, and my second-floor apartment back on the island was remarkably undamaged. I lost amazingly little property in the storm, only some books that were at the office. The office was not so lucky as my place. The office is located on the ground-floor, but near the highest street on the island. Even so, the storm surge flooded the building up to four feet. Computers, microscopes, binoculars, slide-projectors, many books, and cabinet drawers full of essential grant papers were waterlogged, went swimming, or were overgrown with mold. And this was no ordinary water filling the office. When the water level riseth, the sewer overfloweth. My last day with the organization was spent clearing and cleaning the toxic office. The smell made my head swell and nose run, and I hoped that my rubber gloves and boots were sufficient shield from the brown scum that covered all surfaces that were flooded. The organization lost about 75 per cent of equipment, and the Galveston Bay will be unsafe to kayak for months. All but the four veteran employees were laid off temporarily, and I have decided to migrate onward.”

When the water level riseth, the sewer overfloweth. Even without a Hurricane, there are many dangers to so-called sanitary sewers. Human excrement combines with drain cleaners and industrial chemicals, and is distilled at sewage treatment plants to create toxic sludge. Depending on your municipality, the sludge may be landfilled, incinerated, or applied to agricultural lands. All of these approaches can be hazardous to your health, and none are environmentally sustainable.

There is a better way. I learned about it thanks to The Homestead, and made it my topic for the Homestead Seminar for my senior year. Human excrement or “humanure” can be a valuable resource—if it is composted under the right conditions so as to kill pathogens. Sustainable living-practitioner Joseph Jenkins has authored an invaluable resource on this subject—The Humanure Handbook. (The Composting Toilet System Book by David Del Porto and Carol Steinfield is also a worthy tome.) With composting toilets, we could all be safer and our planet healthier.

Beyond waste management, The Homestead also taught me about temperature management. The strawbale Cabin Bob is cool in the summer with no air conditioning, and comparatively warm in the winter, even when there isn't a fire. Overall, the structure maintains homeostasis considerably better than the apartment complex in Houston. The Homestead has much to teach us about wiser forms of technology. 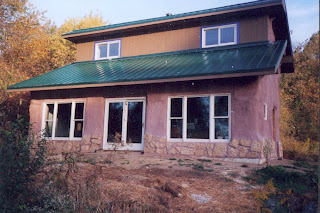 Cabin Bob and its proud south-facing windows, which capture the sun's warmth in the winter. The structure and its surroundings have evolved considerably since this 2001 photo.
I had intended to include with this post the educational comic/ poster on humanure that I created for my seminar project. I have been unable to find this item, so will post it at a later date. For now, I'll share a sea turtle. These critters are affected by all that occurs around coasts, and will appreciate a transition to sustainable methods. 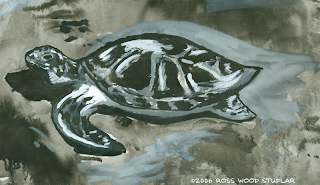 Posted by Ross Wood Studlar at 11:21 PM No comments:

Love in Washington; Tragedy in Japan; Innovation in Ohio; Hopes for a Sustainable Future

A huge congratulations to my friends Dave Hughes and Erin Stamper, who will be married this Saturday.

I spent the weekend at Mount Baker, Washington, for Dave's bachelor party. What better way to spend one's last weekend as a bachelor than skiing in a winter wonderland? 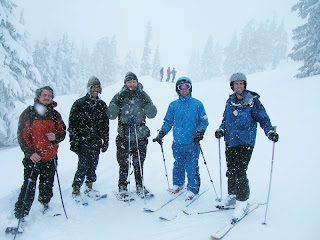 Left to right: Mark Pascoli, Andy Juechter, Ross Studlar, Dave Hughes, Colin McCrate; photo by Brad Halm
Since returning to town, I have been barely able to leave my computer, as I read, watch, and listen to news with rapt attention.

My heart goes out to the people of Japan. My sorrows and sympathies go to the casualties and their families. I hope that the survivors of the Sendai earthquake and tsunami can recover your lives and livelihoods as soon as possible.

I sincerely hope that the damaged nuclear reactors at Fukushima Daiichi do not have a full-scale meltdown. I also hope that humanity learns from the experience.

satellite image of explosion at unit 3 of Fukushima I nuclear plant on March 14, from Digital Globe
Japan is not the only geologically unstable area with nuclear reactors. A similar or worse event could easily happen in California. As the anti-nuclear activist Harvey Wasserman points out, the nuclear reactors in Japan and the United States are designed to withstand earthquakes with magnitudes of 7.5 on the Richter scale. The Sendai quake had a magnitude of 9.0—over 10 times what the reactors were built to handle. No reactor is earthquake-proof (or terrorist-proof), despite the assurances of industry pundits. I stand with Wasserman that “this technology simply does not belong on this planet.”(1) If only we could get our elected officials to agree! President Obama's 2012 budget currently includes $36 billion in loan guarantees to the nuclear industry, to provide for the construction of new reactors. But with sufficient public pressure, that can be changed.

Civilization is better off with solar energy. It is clean and renewable, and a damaged solar panel will not give anyone radiation sickness. There is no time like the present to launch a full-force effort to transition to sustainable energy sources, solar included. (It would create jobs!) 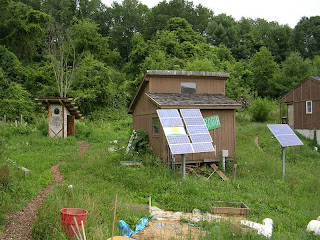 As a graduate of The Homestead at Denison University, I have seen the power of renewable energy up close and personal. I even used wrench and screwdriver to install solar panels, and hammer and saw to build parts of a strawbale cabin. The Homestead has always been ahead of the curve when it comes to sustainable technology. Homesteaders installed the first on-site solar-electrical system in 1983 (when I was a wee child in Kentucky); it is one of the oldest continuously-operating photovoltaic systems in Ohio. Homesteaders started work on the strawbale Cabin Bob in 1997; it is one of the first such structures on any U.S. college or university. And Homestead students were building cabins with passive solar heating way back in 1977. As Michael Noble (executive director of Fresh Energy) said, “First you change your lightbulb, then you change the law.”(2) The latter change is markedly more difficult than the former. But The Homestead and places like it give us glimpses of what is possible if we work together. Perhaps that can inspire us to move to change the larger world. 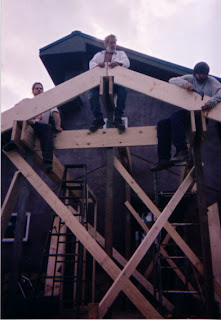 Those clever and compassionate critters

In the beginning of Wild Animals I Have Known, Ernest Thompson Seton writes:

“THESE STORIES are true. Although I have left the strict line of
historical truth in many places, the animals in this book were all
real characters. They lived the lives I have depicted, and showed
the stamp of heroism and personality more strongly by far than it
has been in the power of my pen to tell.”

I feel the same way about the animal stories that I have written and drawn. With pencil, brush, or even film camera, we can only capture faint shadows of the real animals.

Animals show personality, compassion, love, intelligence, insight, foresight, creativity, and a host of other traits that we arrogant humans try to claim are reserved for ourselves.

I recently discovered this video thanks to my Homestead comrade Luke. A story of friendship and compassion between a canine and a pachyderm.

And THIS video shows one of the most impressive displays of insight by an animal. The raven is the star. Biologist Bernd Heinrich presented Ravens with a never-before-seen puzzle, and 80 per cent of them found the solution with no demonstrable trial-and-error learning.

Ravens and their brain-power have become a subject of fascination for many people, including yours truly. I discuss the subject in my Crater Lake campfire presentation “Tricksters in Myth and Science.” And of course, the mythic Raven is co-star of the my epic comic book (right). I have just completed a new mini-comic, which does not involve a raven, but does involve his distant cousins--mergansers, bald eagles, and others. I'll have more to say in an upcoming post, when I announce its release. In the meantime, I'll be drawing more of our wise and caring relatives, the other animals.

Merganser spreads her wings
Posted by Ross Wood Studlar at 8:50 AM No comments: