Beasts from the sketchbook

I strive to draw every day. In between larger comics projects, I simply open my hardbound sketchbook, get out my pencils and nib pens and brushes, and draw what I imagine--often aided by picture-laden books and google image search. A sampling of beasts from my most recent sketchbook:

Posted by Ross Wood Studlar at 2:21 PM No comments: 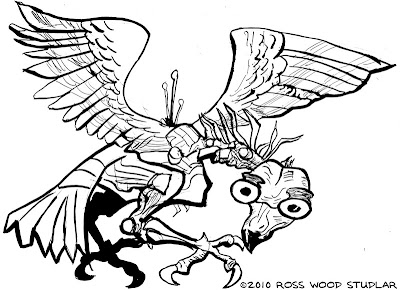 A cybernetic skeletal owl. Since both owls and cyborgs are known for their potent eyesight, imagine what a cyborg owl could do!

And happy Martin Luther King Jr. Day, World! I'll need to remember to perform some community service in honor of Dr. King once I get home. Right now, I'm getting ready for a big move.
Posted by Ross Wood Studlar at 12:40 PM No comments:

Protest in the Zeitgeist

In 2011, protest was in the zeitgeist. (Even a publication as mainstream as TIME took notice, in making the protester the person of the year.) Thus far, the trend does not seem to have slowed with the new year. I hope that it intensifies. I am thankful for the technological tools that help to make it all possible.

Effective protests happened in many parts of the world, including some good ones in my country, the USA. Being an environmentalist, I was particularly proud of the protest on Capitol Hill against the Keystone X-L pipeline (led by Bill McKibben.) And then, the Obama administration postponed their decision on the project. Another example (and perhaps under-reported one) of how protest CAN lead to changes in national policy.

And I am proud of all the brave folks at Occupy Wall Street—especially for their day of occupying bridges, to demand that governments create jobs by investing in the aging infrastructure. The real way out of our jobs crisis is to create useful government jobs, which put people back to work while improving everyone's quality of life. A win-win approach, successfully applied during the great depression, in form of the New Deal. Today, we still reap the benefits from the good work done by the WPA and CCC. And those jobs were not created by cutting taxes or curbing spending! In fact, they were the direct result of spending, and funded by taxes.

Evidently, the zeitgeist visited me, as well as my friends in Colorado. We had our own uprising against a local dictator. Although we ultimately lost, we made a mighty display of courage and moral conviction. Captain America would be proud. 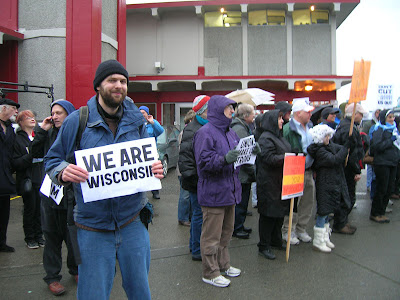 Back in March 2011, I appeared at a public protest for the first time in years—a Wisconsin solidarity rally in downtown Seattle, in front of the fire station (organized by MoveOn). In opposition to Governor Scott Walker's “union-busting” bill, and in support of public workers. I should resolve to attend more protests in the future. Our leaders must be held accountable for their decisions. And while emails, letters, phone calls, and online petitions are useful and essential, they cannot match the power of live human beings at your doorstep, with a demand for change.

*******
I was introduced to political protest in my college Homestead days. I attended Denison University (Granville, Ohio) during turbulent political times. September 11th, 2001 occurred during my sophomore year. Everyone remembers where they were on that day, and I am no exception. I stopped to check my mail at Slayter Hall, and my friend Mike asked, “Did you hear what happened?” I said, “about Cassi?” (our mutual friend). “No, about the World Trade Center,” he said. I went down the stairs to the lower floor of Slayter, where the cafe with the televisions was located. What appeared to be the entire body of students and faculty at Denison were crowded around the televisions. I managed to find some standing room. And saw the towers fall.

9-11 was beyond horrific, but worse nightmares were to follow. George W. Bush and his cronies planned to use 9-11 as an excuse to drop bombs on innocent people in Iraq and secure some rich oil fields. Unless the American people could unite to stop them! In the Denison community, several of my Homestead friends emerged as leaders of the anti-war movement. My comrades Dave and Marko took the lead in moving an anti-war petition all over campus, gathering many hundreds of signatures from students, faculty, and staff, and mailing copies to every key member of the Bush Administration. Multiple Homesteaders were involved in staging an anti-war walkout on a Friday at noon, wherein students and faculty took turns making speeches—both planned and impromptu, and petitions circulated for ending the war and impeaching the president.

Every Thursday morning, I joined my Homestead friends for the protest on Main Street, Granville. We piled five-to-ten deep in the bed of our old beat up gray dodge pickup—the DURP truck—and drove through the icy wind of an Ohio winter, to Main Street, Granville. (Granville resembles a small new england town.) We joined other DU students, professors, and Granville townsfolk, armed, like us, in winter jackets and hats and gloves. We brandished signs with slogans like “Peace is patriotic” and “Support U.N. Weapons Inspections”. We stood on the sidewalk for an hour, and made ourselves as visible as possible to vehicles and pedestrians. Some pedestrians stopped to converse with us, and many simply smiled and waved in support. Once the war started, competition arrived on Main Street, with some war-supporters standing beside us (some of them veterans in uniform.) Their signs read “Support our troops.” Ours read “Support our troops: bring them home safely now.” I am glad that both sides could exercise their first amendment rights.

And we took the protest beyond Granville. We marched alongside thousands of other demonstrators, first in Washington D.C., then in New York City (Columbus as well, and D.C. again, although I missed those two.) In October 2002, a dozen or so Homesteaders and friends piled into a few cars and a rental van to go to the first big anti-war march in DC. We were a motley band of college boys and girls, diverse in size, skin-color, and hair-length. We brought sleeping bags, and white signs with red letters, the same signs which we would later use in Granville. (I liked “US oil consumption is a weapon of mass destruction.”) Mud spattered both our signs and ourselves. There is a lot of mud at the Homie, which tends to find its way onto one's person and belongings. Ol' Homesteader Matty made a unique sign: “Re-elect Carter.” After a long evening and night of driving and an arrival to D.C. in the wee hours, we slept the remainder of the night in a university auditorium (a friend let us in). The next morning, we answered multiple inquiries from fellow demonstrators and pedestrians as to who we were and where we came from that is so muddy. Then we joined the demonstration. We marched, in a wave of bodies and signs and artwork (and some costumed traveller's dressed like Bush and Cheney monsters.) Drums beat, and chants arose of “1-2-3-4 We don't want another war; 5-6-7-8 stop the racism stop the hate!” It was an honor to have been a tiny piece of this historic day, and the subsequent ones.

Despite our best efforts, the war still happened. And exceeded our worst nightmares in its level of violence. Nonetheless, the efforts led by my Homestead comrades were noble, and the experience was unforgettable. And it is another demonstration of the power of community. I would not have had the motivation to be so involved in the movement had I been operating alone. It is an honor to have marched next to friends.
Posted by Ross Wood Studlar at 1:58 PM No comments: