Bear in the Valley

In Hayden Valley, a young adult grizzly bear was out and about, on the far side of the river. Likely to be a female who is known to roam the valley. Many people pointed their cameras and binoculars from the field by the road, and luckily kept their distance. The bear chomped away on some carcass in the field, then trotted towards us. I was a ranger on duty, and so I told folks to step back and keep the 100 yards distance. The bear hopped into the river. She waded out to grab hold of a bison carcass (mostly a skeleton with a bit of flesh still clinging.) She spun the carcass about and reared up on top of it, sunk her jaws deep into the abdomen. She attacked the carcass from every angle, and tried to extract every last morsel of meat, all the while braving the chill water. Then she went back to the far side of the river, and ran downstream. The people followed, most in their cars, to the next pull-out. A pair of law enforcement rangers arrived there, and I left the crowd control to them. In this event, had to refrain from photography, so as not to look like a tourist. I did get some fine views of the distant bear through the binoculars. The bruin, in classic fashion, exploited the remains of animals who did not survive the winter--a brutal time for the large ungulates. Yellowstone astounds!
Posted by Ross Wood Studlar at 9:57 AM No comments:

Be wary of animals large....

I asked my supervisor at Yellowstone Park her opinion about solo hiking. She said that she did it regularly, and called it a “calculated risk.” The next day, I was out alone, hiking stick in hand, wide-brimmed hat on head, in a lodgepole pine thicket, after a meadow. I had my canister of bear-spray clipped to my hip. I had sent my friend Lesley a last minute text message about where I was going, which I consider as passing with a “D” when it comes to notifying an outside party of one's travel plans. I had hiked solo in black bear country countless times, but Yellowstone is also home for the larger and less predictable grizzly. 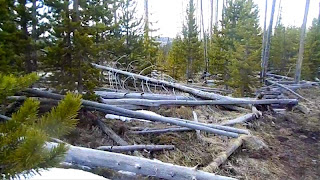 As I went, I spoke “Yo whazup bears, I be passin' through.” (They normally walk away at the sound of a human voice.) It felt odd, talking to myself, and the one-sided conversation was hard to maintain. I passed a wetland where the chorus frogs sang  their continuous “Creek-eek.” There were many patches of snow among the fallen timber.

In the forest, it was scarier. I glanced about, wondering what lurked in the shadows under the trunks. My senses heightened halfway to the level of a deer, the ever-vigilant prey. My imagination turned a small branch breaking in the wind into the footfall of a massive animal; a crunch of rocks under boot became a bruin's grunt; a boulder into a hairy beast. Then I came to an indisputable sign of the grizzly bear—tracks in the mud, with long claws prominent. 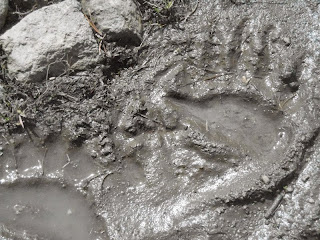 I splashed through some muddy trail to Cascade Lake, my destination. I turned around and headed back.

I strode faster on the way back, my confidence increased. Still I periodically checked for my canister of spray, and made my voice quietly heard to the trail ahead.

The next morning, in the shower, I felt a little bump somewhere on my buttocks. After out-ruling potential scabs or zits, I knew what I had to do. I grasped the tick with my fingernails at the front of the head, and ripped it out forcefully, some skin along with it. With abdomen full of blood, the critter slipped out of my hand and down the drain of the sink. With its little legs waving, I failed to identify the type of tick, but regarded it as certainly larger than a deer tick. Now, a week later and with no symptoms, I am in the clear. 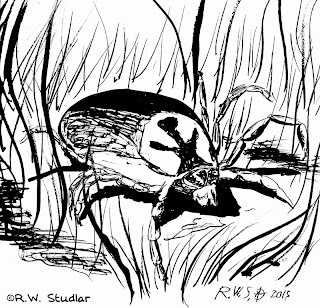 However, the irony was not lost on me. While I was distracted by the thought of large and fearful mammals, a silent but deadly beast, the miniature septic tank, easily crawled up my pants leg. A tick check the same day as my woods walk would have saved me some blood and concern.

Precautions for bears and sharks are important. However, the deadliest animal in the world is the mosquito, for its spread of disease. Ticks rank second as disease spreaders. Bees are another force to be reckoned with, as 53 people per year in the US die from allergic reaction to their stings. We can share the wilds with all these creatures, with the right precautions. Enjoy the woods, my friends, but be wary of animals large and small!
Posted by Ross Wood Studlar at 7:10 PM No comments:

Ravens in the Steam 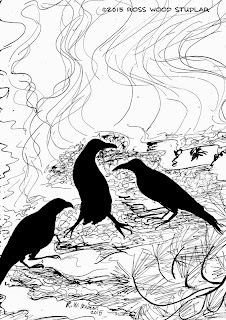 Another vignette from my visit to Yellowstone last year:

“The ravens were everywhere. They watched from trees, soared above on ebony outstretched wings, owners of the domain of yellow rocks. Along the “back basin” of Norris Geyser basin, a group of three ravens cackled and cawed and croaked, in a three way dialog of some kind. Perhaps gossip about the goofy bipeds who pass in the thousands by day, and point their gaping cameras at the steam.”

This year, I have moved in to Yellowstone for the next five months. My inaugural field sketch, below, I made at Norris Geyser Basin. New stories await! 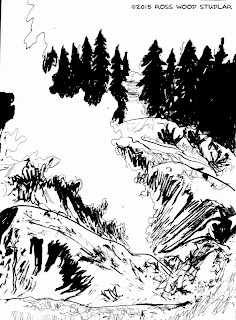 Posted by Ross Wood Studlar at 11:24 AM No comments: