My family has a tradition of sending a traditional Holiday letter/ Christmas letter out to friends and family. I'll share here the section that I penned about me. (Don is my dad and Sue is my mom.)

"Ross began the year in Portland, Oregon, with some hope of finding a permanent home there. He worked part-time teaching at an after-school program in nearby Gresham, where he led youngsters ranging from Kindergarten through fifth grade in a variety of scientific projects and games, most notably growing a fruit and vegetable garden. He also volunteered as a Crew Leader for Friends of Trees, guiding teams of volunteers in forest restoration at city parks and schools. 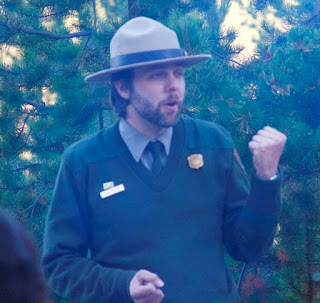 However, none of this led to a longer-term job, and in May Ross crammed all his stuff into a Subaru once again, and returned to a second season of ranger work at Yellowstone National Park. This time, his station was Norris Geyser Basin—the oldest, hottest, and most frequently changing hydrothermal area in Yellowstone. Norris is home to Steamboat Geyser, the world’s tallest geyser, with major eruptions three times the height of Old Faithful and manyfold louder and more violent. However, Steamboat is unpredictable, with intervals between major eruptions ranging from four days to fifty years—making it far less friendly to a tourist’s schedule! On his talks and tours, Ross stood before Steamboat and invoked fear and awe by telling the story of its latest major eruption, which happened in September 2014. Generally, Ross enjoyed the rustic environment of Norris—with its 1930s buildings and limited staffing—which contrasted with more developed parts of Yellowstone such as Old Faithful and Canyon Village. He applied DIY skills to electrical outages and dilapidated boardwalks, and responded to medical and enforcement situations while rangers en route from Canyon maneuvered their vehicles through the busy summer’s perpetual traffic jam. He gave old-fashioned evening campfire programs at the Norris Campground without the aid of powerpoint. His chosen topic for said programs was “Survival Stories from Yellowstone”—an increasingly relevant subject in our changing world! He attended the 100th birthday celebration of the National Park Service at Mammoth Hot Springs, and a three-day class about Native American Plant Uses (led by ethnobotanist Linda Black Elk) at Lamar Valley. He went on backcountry hikes with friends on days off, visited waterfalls, and met wildlife such as bighorn sheep.

After Yellowstone, Don joined Ross for a road trip back home to West Virginia. Ross now assists with the move to North Carolina, and reckons with the huge volumes of paper which he left in the basement and his bedroom. 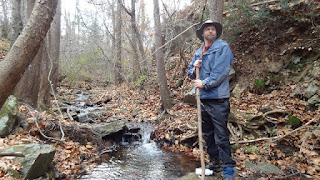 Ross’ alma mater The Center for Cartoon Studies had its 10th anniversary celebration this year. Before the reunion in Vermont, Ross and four of his former classmates (coordinating over Facebook) created a comics anthology called Pioneers, about the trials they faced as part of the school’s first-ever class. Ross completed two other comics this year—Guerilla Football, a science fiction work starring a cybernetic horse and orangutan; and Resurrection: the Real-Life Superpowers of Frogs and Mosses, a nonfiction work about the staggering abilities of amphibians and bryophytes to recover from desiccation and freezing. For this story, Sue lent her expertise on mosses especially. It will be published in the natural science comics anthology Awesome ‘Possum Volume 3. Many friends and family made donations via Kickstarter to fund the book’s publication." 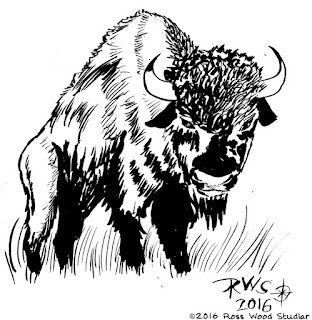 Lord of the prairie.
Posted by Ross Wood Studlar at 3:36 PM No comments: