My thesis at The Center for Cartoon Studies was a science fiction graphic novel project, titled Arridaba. It featured sea turtles, and futuristic sociopolitical issues surrounding a life-prolonging drug made from their brains. Despite the intriguing premise, the story wasn't quite the masterpiece I had hoped for. Even so, I made many discoveries about my abilities as a cartoonist along the way.

During my two years of intensive comic-making at CCS, I increasingly came to know that animals and monsters are among my artistic fortes. For the scene below, I invented the Gullzards as a plot device, to knock the flying cops out of the air. Being somewhere in between ancient reptiles and modern birds, the Gullzards are quite reminiscent of Archeopteryx. I subsequently planned to create a story about the lives of these "primitive" birds, but haven't gotten around to it yet. Maybe sharing them here will provide a jump-start:

I experimented with ink-wash as "color": 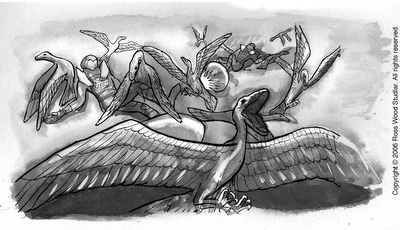 Beware of the flying Gullzards!
Posted by Ross Wood Studlar at 8:58 AM 2 comments:

Return of the Midgard Serpent 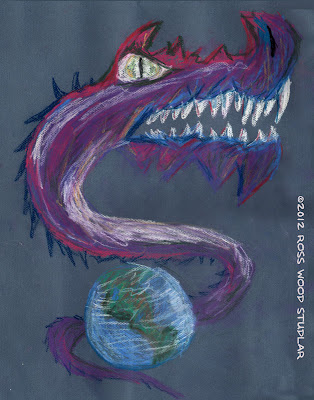 Recently, I have been at work reclaiming my oil pastel drawing skills. It is the medium I have chosen for the cover of my forthcoming comic book (details to be announced, SOON!). And so, I am producing a series of "warm up" drawings, to get my color muscles in better shape. One such drawing is displayed above.

I might call this “Return of the Midgard Serpent.” As my previous rendition of the big snake is popular on the web, it seems wise to bring him back.

We have all seen or heard a story where a man goes fishing, and the bobber takes a nose dive-- something bit the line. He tries to real it in, but it pulls back like the gravity of Jupiter. And then he discovers he has hooked a giant monster! Perhaps the oldest recorded use of this motif took place in Norse mythology, when Thor hooked the Midgard Serpent.

I'll plan for more appearances by the big snake. And like I said, I have a comic coming down the pike, which features not reptiles but AMPHIBIANS. Stay tuned, true believers.... !
Posted by Ross Wood Studlar at 11:09 AM No comments: