The Canyon of Yellow Stones and Waterfalls

At long last, I visited the place of legend—Yellowstone National Park. Among the many awe-inspiring sites was the Grand Canyon of the Yellowstone.

Thomas Moran's epic painting of this great chasm was instrumental in making Yellowstone become the world's first national park. I am no match for him, but still I made the attempt to capture the essence of the Canyon and the Lower Falls, in oil pastels and watercolors. 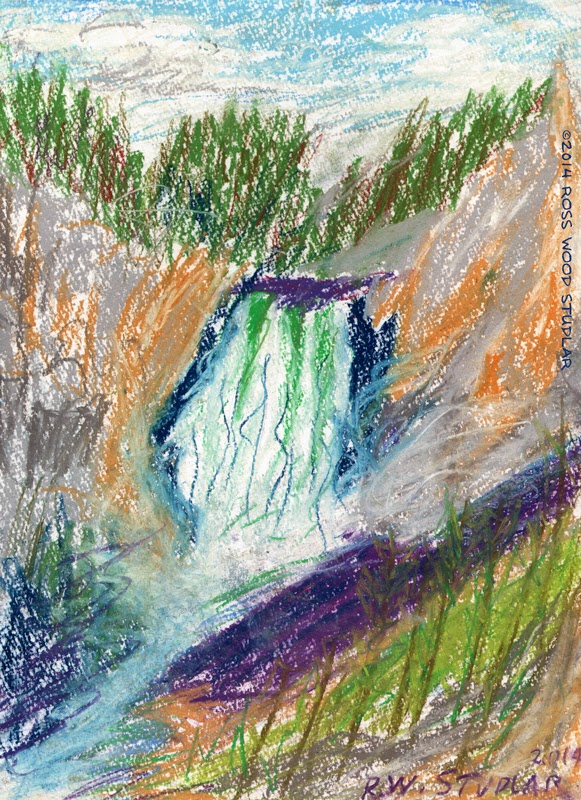 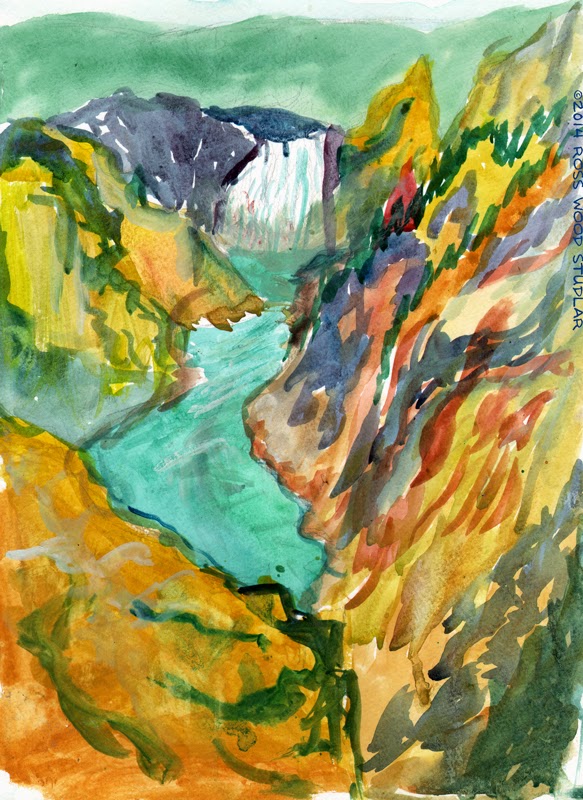 I am at work on a longer and more complete entry on my Yellowstone adventure, will post when I can. For now, excelsior!
Posted by Ross Wood Studlar at 8:34 AM No comments:

Bats Over the Water

When first I encountered a bat up close—close enough to touch—I rapidly sketched the critter, and wrote beside it “I am amazed by the live bat, how fuzzy its body, how delicate its fingers, and stretched between them—that's real skin! No photograph can capture it, nor can the sketchbook.” 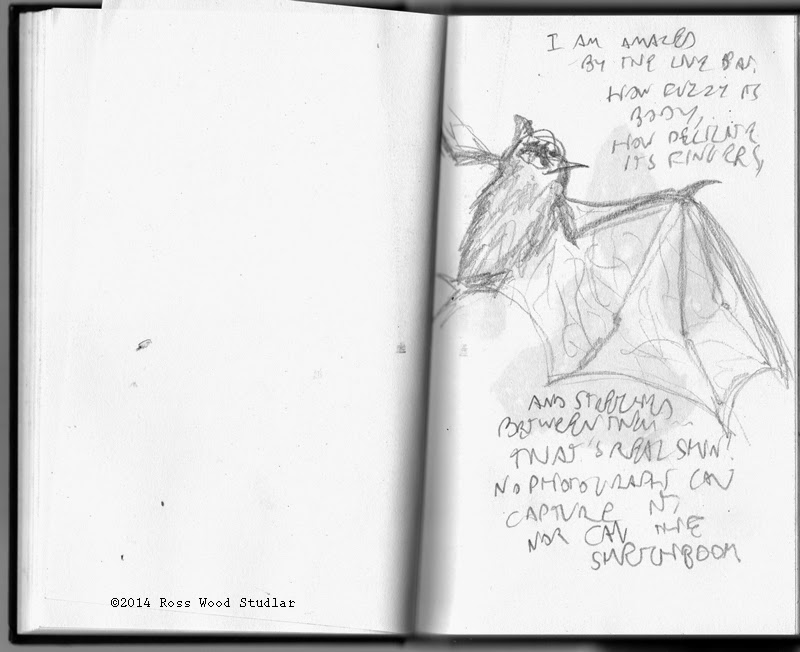 The event was our first bat survey night of the summer season at Timpanogos Cave National Monument, sometime back in June. The Natural Resources staff run the operation, to discover what bats inhabit the canyon and forest. The method: find a quiet spot on the American Fork river somewhere in the National Forest land, and stretch a net across. Wait for the bats to swoop in for a sip of water and get caught in the net; handle with gloves; identify the species, gender, etc; weigh the animal, photograph it, record its echolocation call; then release the furry flyer. Not having had my vaccinations, I just watch (and draw and photograph, as I can.) 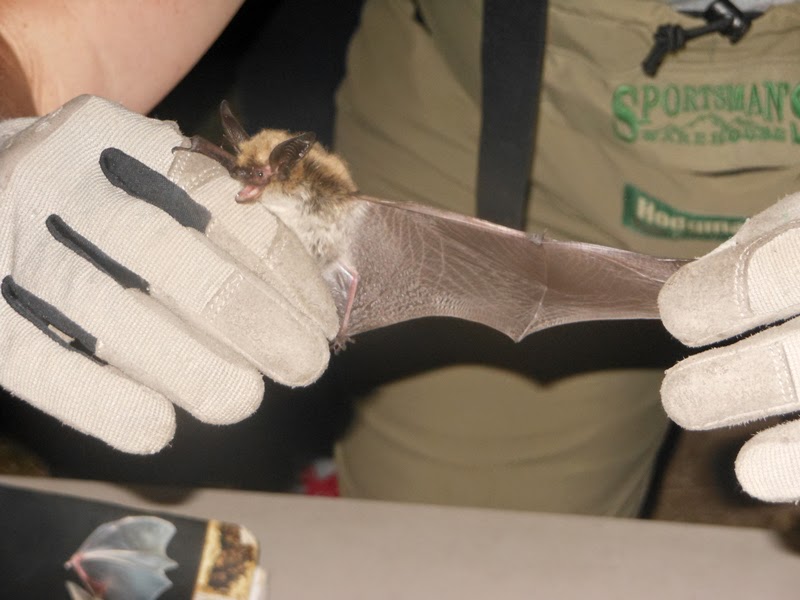 I have been to three more bat nights since; all have provided an opportunity to listen to the river and watch the moonlight draw patterns in the ripples, under the canopy of silhouetted trees and rockfaces. As for the bats themselves, the level of activity has varied. On some nights, only a few get tangled in the artificial spiderweb. On the second bat night of the summer, we had a bonanza.

We most often catch the small bats of the genus Myotis (We can generically call this group “little brown bats.”) These streamed in on that special night in June, but so did one hoary bat—a larger and feistier type—followed by another and another. These fellows don't take kindly to being grabbed, and bite and flail, captives to no one, not even the pale-skinned Kaiju. For hoary bats, two pairs of gloves are recommended. 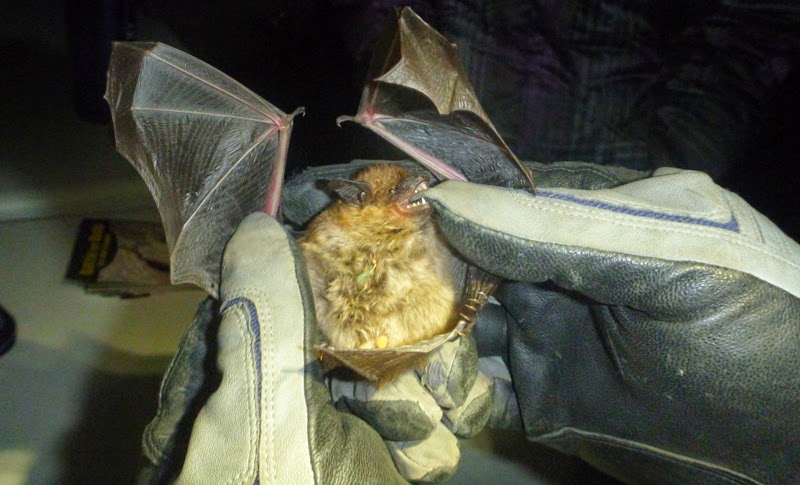 Up close, bats provoke incredulity: so like us, as mammals, and yet so alien—with small size, skin and veins stretched like a latex glove across wings and tail, and a different sensory world by flight and echolocation. What goes on in their little minds is hard to fathom, and that such animals can exist can be hard to believe. We might seem just as strange to them, were they not caught up in the struggle to escape our clutches at bat night. Let us hope that they can continue to awe us, and escape the wrath of White Nose Syndrome.

Back at the studio, I made tribute to the winged mammals on scratchboard. I chose the Townsend's big-eared bat, which we see sleeping or flying about in Hansen Cave (part of the Timpanogos Cave system) from time to time. I intend to create more stories on bats, in words and pictures. I'll make the time somehow. 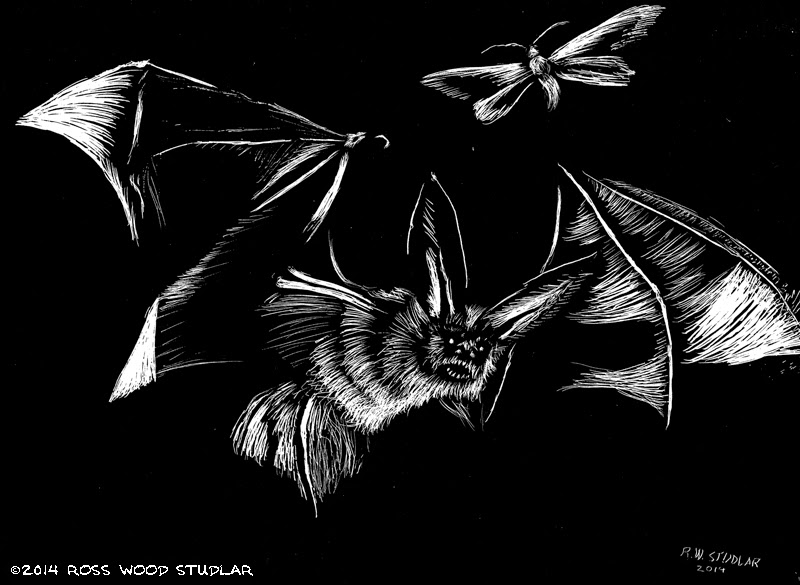