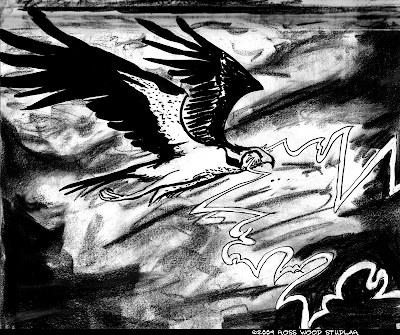 "Thunderbird is a very large bird, with feathers as long as a canoe paddle. When he flaps his wings, he makes the thunder and the great winds. When he opens and shuts his eyes, he makes the lightning. In stormy weather, he flies through the skies, flapping his wings and opening and closing his eyes." 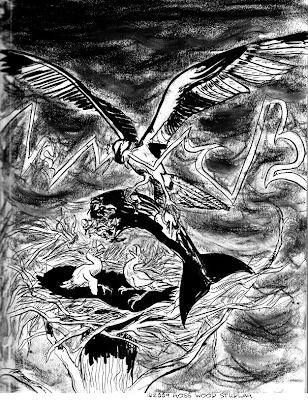 "When Thunderbird flies toward the ocean, his wings darken the sky and their movement makes a loud noise. When he sees a whale, he throws Lightning Fish into its body and kills it. Then he carries the whale back to the mountains and eats it."
--Quillayute and Makah legends, as retold by Ella E. Clark, INDIAN LEGENDS OF THE PACIFIC NORTHWEST © 1953 the Regents of the University of California

It occurred to me that it would be really #$%*ing scary to encounter Thunderbird by hot air balloon. And I followed that strange impulse to draw one's nightmares….

For the latter two of these drawings, the originals are for sale.
Posted by Ross Wood Studlar at 9:35 AM 1 comment:

In the fire, the fierce joins the cute It kills caribou ten times its own size. It battles wolves. It challenges cougars and grizzly bears over kills.

But even the wolverine is not safe from global warming, according a recent story from the BBC. The decline in snowpack is leading to a decline in wolverine populations.

I'll pull a few wolverines from my sketchbook.

Wolverine vs Bear
Posted by Ross Wood Studlar at 10:05 AM No comments: