Jumping spider in the works

I’m working on a comic about jumping spiders!  Here is a panel, which I will letter later. 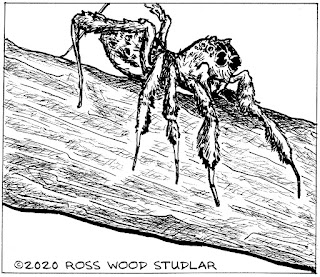 Posted by Ross Wood Studlar at 10:54 AM No comments:

For the Love of Woman, Man, and Especially Child, Turn Down the Heat 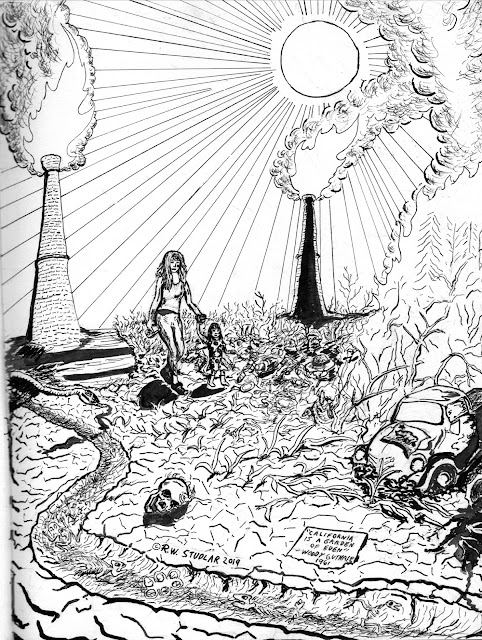 “Many more people are beginning to grasp that the fight is not for some abstraction called “the earth.”  We are fighting for our lives.  And we don't have twelve years anymore; now we have only eleven.  And soon it will be just ten.”  —Naomi  Klein, On Fire: The (Burning) Case for a Green New Deal, 2019

The dizzying pace of climate catastrophe has made it difficult for me to write a piece to accompany my illustration.  The inferno California wildfire season in 2019 provided much of the impetus for my image.  Then I learned that California has already had at least 1,506 wildfires in 2020.  I had planned to write about the bushfires of Australia in the summer of 2019, when the world gasped at the heart-wrenching scenes of kangaroos fleeing the flames in successive bounds and koalas wrapped in bandages after getting torched.  Then a quick web search revealed that the bushfires had continued into January 2020 (March in some locales).  There was so much smoke in Sydney in December 2019 that their air quality was 12 times the “hazardous” level.  Now, as the world's attention is focused on the Coronavirus pandemic, 2020 is on pace to be the warmest year in history and the western U.S. faces megadrought, quite possibly the worst in 1200 years.  Much of Africa deals with its worst swarms of desert locusts in 70 years.  The locusts devour crops like wildfires do trees.  They thrive in a warmer world.  So do mosquitoes—the deadliest animals on Earth, for their power to spread malaria, yellow fever, and other diseases.

And if we don't take drastic action, this dizzying pace will dramatically accelerate.  According to some models, the Earth’s climate will warm by 4.3 degrees Celsius by 2100 under a business-as-usual scenario.  Journalist David Wallace-Wells summarized predictions by climate scientists for this overheated future in his book The Uninhabitable Earth.  He said, “In a four-degree warmer world, the earth's ecosystem will boil with so many natural disasters that we will just start calling them “weather”: out-of-control typhoons and tornadoes and floods and droughts, the planet assaulted regularly with climate events that not so long ago destroyed whole civilizations.”  Among Wallace-Wells's most frightening passages are those about heat waves: “Since 1980, the planet has experienced a fiftyfold increase in the number of dangerous heat waves; a bigger increase is to come.”  In a four-degree warmer world, “the deadly European heat wave of 2003, which killed as many as 2,000 people a day, will be a normal summer.”  Due to physical limits to the human body’s tolerance to heat and humidity, parts of South Asia and the Middle East are on course to becoming unlivable by the time a child born today turns about 55.

I stayed home for the fiftieth Earth Day on April 22, 2020, showing due diligence to the social distancing order from the governor of New Mexico.  It was hard to miss taking part in mass gatherings for this historic and momentous day.  Nonetheless, the legacy of the first Earth Day in 1970—when 20 million people (including my mother) partook in rallies and marches—lives on.  Earth Day co-founder Senator Gaylord Nelson's words still ring true: “Our goal is not just an environment of clean air and water and scenic beauty.  The objective is an environment of decency, quality and mutual respect for all other human beings and all other living creatures.”

My lofty hope is that the lessons of the Pandemic will prompt us to passionately strive for such an environment.  Our response to the Pandemic and the resultant Great Depression 2.0 has been mixed.  There have been plenty of insanely rich individuals using this disaster to enhance their wealth at the expense of everyone else, following the disaster capitalism model articulated by Naomi Klein.  And yet, national and state governments have made proposals and taken actions for the common good, many unthinkable in the pre-Covid-19 world.

The slowing of the world's economy due to Covid-19 has caused an estimated 5% drop in carbon emissions for 2020.  This is nowhere even remotely close to the drop needed to stave off the worst effects of climate change, and we obviously do not want to attempt to save the climate by wrecking people's lives and livelihoods.  Generally, the Covid-19 lockdown has not had a major impact on humankind’s long-term ecological footprint.  This indicates the magnitude of the task ahead of us.  We need an ambitious Green New Deal to remake our infrastructure and agriculture to work in harmony with the Earth.  The law professor Jedediah Britton-Purdy explains:

“Why a politics of infrastructure?  Because the world makes hypocrites of us all. There are at least 2,000 tons of infrastructure for every human being—things like roads, buildings, pipelines, and cables. We tap into it for everything we do: getting to work, being with family, finding food, staying warm. As a species, we would hardly exist without this technological exoskeleton. It determines our ecological impact much more than individual choices can. I can choose my route through the city, but the city itself determines my carbon emissions.”

Luckily, we have the opportunity to refashion our infrastructure for sustainability.  For example, on the energy front, a study by Finnish and German researchers concluded that the world can transition to 100% renewable power by 2050 and create 36 million jobs in the process.  We have the technological knowhow.  The question is whether we have the political will to implement it on a massive scale.

Given the combined crises of Great Depression 2.0 and the climate emergency, a Green New Deal which includes a just transition should be the issue that unites the American left.  In the past few years, the left has begun to unite to face climate change.  Much has changed in between the televised Democratic primary debates for the 2016 election and those for the 2020 election.  For 2016, when asked by a debate moderator about the greatest threat facing humanity, Senator Bernie Sanders was the only candidate who answered with climate change.  When the same question was posed for 2020, many of the other candidates agreed with Sanders.  For 2016, climate change received fewer than six minutes of air time.  For 2020, the candidates participated in a seven-hour climate town hall, a two-day climate forum hosted by MSNBC, and a Weather Channel special.  The international environmental group Greenpeace analyzed the climate action plans of the 2020 candidates and awarded letter grades.  Senator Sanders scored highest with an A, but even Vice President Joe Biden eventually earned a B+.  (Greenpeace awarded a D- to the climate plan that Biden had in April 2019.  After popular news media trumpeted this low score, Biden quickly replaced his initial plan with a more ambitious one.)

Throughout all this, the Republican party led by President Donald Trump continues to deny that anthropogenic climate change is real—an unscientific position on par with saying that the Earth is flat or that viruses don't exist.  The general election is on November 2, 2020.  If we want to prevent the horrific predictions of climate science from coming true, we must vote the Republicans out.  Then use every tool in the toolbox to pressure Democrats to deliver a massive Green New Deal.  When I volunteer to get out the vote, I will be thinking of my friend's daughter, and all the children I know.