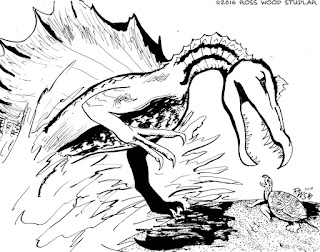 On a visit home for Christmas, I riffled through a pile of National Geographic's, accrued from the past few years. The issue with Spinosaurus on the cover caught my attention. I recalled how I had thrilled to pictures and stories of dinosaurs in my youth--including some Nat Geo's from the 1980s and '90s! In an instant, my child's sense of curiosity and wonder came back. Spinosaurus has dethroned and replaced Tyrannosaurus Rex for the title of largest carnivorous dinosaur, as measured by body length from tip of nose to tip of tail (fifty feet for Spiney, forty for Rex.) In habits, Spinosaurus resembled a modern crocodile, spending most of its time in water and some on land. Fish were probably its primary food, along with other aquatic life, such as turtles. Nature is a harsh and unforgiving place for the hunted--or for the hunter who doesn't meet his dietary quota and starves. I tried to faithfully represent the ancient reptile in this drawing, although he's not around anymore to give me a critique. Ah well, if he were around, he'd probably be more interested in my warm flesh than my drawing!