Ode to the Piglets

I wish good luck and good fortune to my comrades in Vermont, and to everyone who was affected by the recent hurricane and floods.

I have faced travails of my own in Colorado, but not due to weather. I have every hope that I am now coming to better times.

Our mother pig Laura Jean knows a thing or two about travail, having experienced a traumatic birth, which would make the most experienced midwife shudder. You may recall my account of the drama, "A Matter of Birth and Death". I made some illustrations to the story, which I share below.

Now, the piglets have grown. They weigh close to 100 pounds each. They utter low grunts and high-pitched squeals, loud enough to drown out my voice when I visit them. Being pigs, they are preoccupied with food, and seem especially fond of grain, milk, and eggs. They eat frantically, and shove their brothers and sisters aside when they become barriers to food. We separated the pigs from their mother over a month ago, so that she is spared from their hunger for her milk. They are too big for that now, we have declared.

Now seems a fitting time to commemorate the piglets when they first entered the world, as six-pound bundles of curiosity....

Posted by Ross Wood Studlar at 8:59 PM No comments:

Kids love animals, so should we all 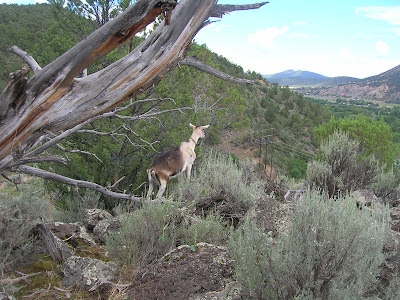 At Rock Bottom Ranch, my past two weeks have been very busy. I have guided day camps for kids, including specialty 'Map and Compass' and 'Barnyard Art' camps, as well as 'Goat Ropers' (our general farm & nature camp for ages 8-10.) I have worked feverishly to prepare lessons that carry themes and impart knowledge and skills. No matter how clever I think that my programs are, the kids are still primarily interested in visiting the animals and touching them. Evidently, my orienteering course or landscape painting session still cannot match the magic of petting a living, breathing goat. Or holding a chicken, petting its feathers and hearing it cluck.

This fascination with animals seems to be universal among children. Even in our high-tech age, kids willingly put down their smart phones when a live animal enters the scene. Beautiful mountains and landscapes can also capture kids attention—but not as much as animals. I have seen a group of four-year-olds turn their gaze away from Crater Lake to observe an ant.

For some reason, as people get older, their fixation with the beasts dissipates. Their favorite place for recreation changes from the zoo to the bar; animals are noted mainly for their utility value (which is, most often, their corpses as food).

In my days at The Homestead, I remember the thrill of bringing four chickens home, in a box in the back of the truck, after I obtained them from a local farmer. They huddled close together as I drove, while the box shielded them from (most of) the cold wind. We put them in the coop, and they continued to huddle. A few days later, we let them outside. They squawked and flapped and strutted and pecked and pawed the Earth. They were ALIVE! They laid tasty eggs. I was proud to have re-launched the chicken project, which had lapsed after raccoons and foxes ate the previous flock. And I was proud to be raising the birds in general, while 99% of the people at Denison University had only one sort of interaction with chickens: eating their flesh or eggs, which had been trucked in, mostly from factory farms. The Homestead and I were ahead of the curve, when it came to understanding and feeling the essential connections between soil, food, and people.

Adult humans of the 'mainstream' culture do maintain interest in at least some animals. Dogs and cats continue to win the hearts of their keepers, of all ages. Evidently, the spark of affinity for animals remains, somewhere in us all.

I hope that we can kindle that spark, in both the young and the older. We should give our fellow animals more heed. I only wish that we could impart but a fraction of the empathy that people feel for cats and dogs to pigs, chickens, cows, and other livestock.

We live in the age of factory farming—a mass abuse and torture of animals to exceed anything undertaken in previous generations. Farm animals have the right to feel the sun and wind on their backs and the earth beneath their feet, to experience the changing seasons and the delightful buffet that mother nature provides. All of this is denied them in the cages of factory farms. If you have not heard about the horrors of such farms, I advise viewing the short film "Meet your Meat" (narrated by Alec Baldwin). It is graphic, and painful to watch, but it is the responsibility of consumers to know the truth.

While factory farming remains the dominant mode of animal agriculture, interest in alternatives is on the rise. The local food movement is growing. In some places, graduates of The Homestead lead the way. In 2007, the intrepid Homestead alum Colin McCrate founded the Seattle Urban Farm Company, the first of its kind in the Emerald City. He recruited fellow Homesteader Brad Halm to become co-manager. They work to convert backyards and urban lots into secure and sustainable sources of food. Their efforts include egg-laying chickens, as well as variegated edible plants. And in the Roaring Fork Valley of Colorado, Rock Bottom Ranch isn't the only place raising livestock. An increasing number of urbanites and suburbanites have expressed interest in learning how to farm in their backyards. And, I recently learned that a Basalt woman is determined to keep her flock of chickens—and will fight the town council to make it happen.

These are encouraging signs. The rewards of farming, and raising free-range livestock, are many. In the process of improving animal lives, we will improve our own. 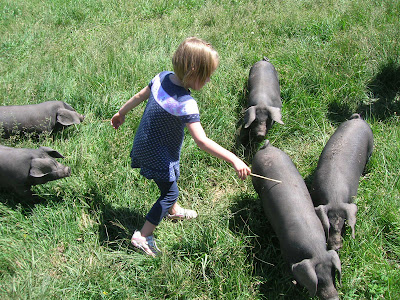 Posted by Ross Wood Studlar at 9:21 PM No comments: