Searchers for Greatness in 2015

Inevitably, the changing of the year is a time of reflection. A review and reassessment of the recent past, and a moment to plan and hope for the future. A time when millions of Americans resolve to go to the gym, and most don't make it past January. Although fitness is important, these people are not thinking big enough. Former congressman and highly-progressive presidential candidate Dennis Kucinich has a broader and more visionary new year's resolution for America, which includes a full-employment economy, an end to NSA spying, reparations for the wars in Iraq and Afghanistan, and a transition to sustainable forms of agriculture and energy, to halt global climate change. My resolutions and yours should be similar in scope!

Geographically, my 2014 spanned across many parts of the western United States. Although I still need to think bigger when it comes to accomplishments for the world, it is nice to look back with a bit of awe at all the red monoliths I saw and the frigid waters I stomped through. It is wise to pause and feel some wonder at our amazing world, a quest assisted by photos like these and these.

For the long-winded Studlar family holiday letter, I wrote the following for my part:

“Ross has continued to work in National Park Service sites that feature caves. He finished a volunteer post at Wind Cave, was a summer Ranger at Timpanogos Cave, and then reprised for the winter a seasonal Ranger job at Carlsbad Caverns (held previously in summer 2013.) This all happened because one cave park led to the next—Ross is still a forest dweller at heart! Timpanogos Cave has its fair share of forests as well, with a daily hike up a rocky mountain required to reach the trio of glittering caves, the last and most impressive of which (the monument’s namesake) features many thousands of helictites—formations that resemble writhing snakes. With its comparatively small staff, Rangers at Timpanogos Cave must wear multiple hats, which Ross was glad to do. He guided cave tours and tours of Cascade Springs wetland; patrolled the mountain trail; acted as a primary EMT; and created portions of the Junior Ranger activity books for children. He wrote and drew a comics story about a Townsend’s big-eared bat and a Packrat who have an adventure in the caves, giving the National Monument a rare and innovative edition for its Junior Ranger program. Timpanogos Cave is in the heart of Mormon country. And, unlike most National Parks, the majority of its rangers and visitors are local. Ross was able to make friends across the boundary, even staying with an LDS family for several nights after the season was over .Back at Carlsbad, Ross partook in the Rock of Ages historic lantern tour, a special holiday production, wherein the modern Cave Rangers donned costumes and impersonated key people from the park’s history. Ross portrayed Ray V. Davis, the photographer whose work alerted the public and authorities to the wonders of the caverns, leading to their inclusion in the National Park system in 1923. Ross took pride in playing a fellow artist. In between seasons, he made trips (sometimes solo and sometimes with friends) to the great Sequoias; to wilderness areas of Oregon; and to Zion, Bryce Canyon, Monument Valley, and other legends of the southwest. He agrees that the family trip to Yellowstone was amazing! He transcribes his adventures and draws stories about animals and monsters whenever he can. Follow him at rosswoodstudlar.blogspot.com.”

Using a photo from Monument Valley Tribal Park (taken for me by one of their Navajo guides), I created a spoof movie poster. This made a special Christmas gift for my father. He is a proud Texan, who grew up in the days when John Wayne dominated the box office..... 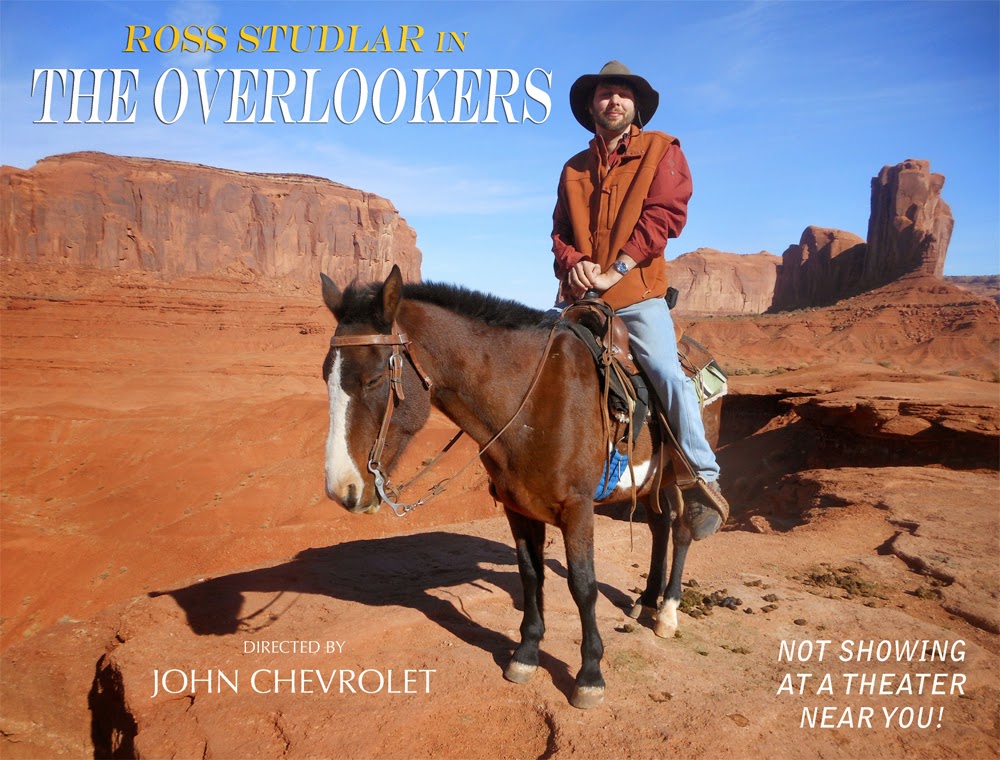