Happy last day of 2011, world! I wrote this blog entry for the day after Christmas, but I am behind as usual. So here it is now, some holiday reminiscences.

I had a few good holidays in 2011. I celebrated Christmas among family, beside the magic light of a recently-cut REAL Christmas tree, and the warmth of a fire. I brought in some applesauce and salsa and pickles (which I had made at the ranch) as presents for family-members. (And if only I had made it to the RBR candle-making workshop, I would have more presents than I'd know what to do with.) I had an extra-special present for my mom—the porcupine, featured in my December 4th blog entry. The original scratchboard now adorns the wall of my folks' house, and so I hope that visitors will visit and see it there.

I also have fond memories for Thanksgiving 2011, which I celebrated in Colorado, at Toklat, among 15 or so comrades from Rock Bottom Ranch and ACES and affiliates. I showed greater culinary ambition than I have at any previous holiday. I made a squash pie, and co-made a spinach quiche, and worked cooperatively with my comrade Melanie to make the main dish, being two free-range chickens from the ranch (freedom rangers), roasted with a plethora of vegetables. This combined with a multitude of other dishes (spinach pie and cranberry sauce and pumpkin bread and etc etc.) as each participant made their favorite item, from their own family traditions. From a culinary perspective, it is hard to compete with an “orphan” Thanksgiving. My comrade Betsy got a photo of me commanding the Toklat kitchen: 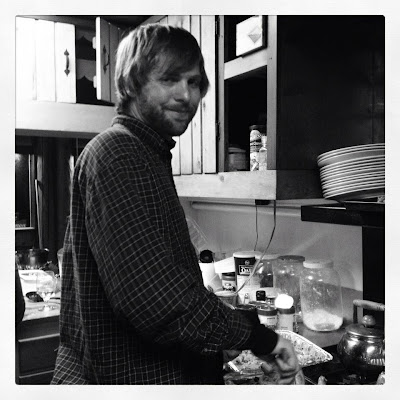 Remarkably, after dinner, I convinced the whole crowd to watch one of my favorite movies: Cemetery Man or Dellamorte Dellamore (1994, directed by Michele Soavi). The story of Fransisco Dellamorte, the keeper of Buffalora Cemetery, where the dead just don't stay dead. And so he is forced to shoot and rebury the "returners", while trying to keep the strange events secret from the townspeople, and avoid the hassle of associated government paperwork. Dellamorte is aided by the igor-like Gnaghi, and seduced by “She” (his immortal lady-love who returns after death, in multiple incarnations, zombie and otherwise). While an action-packed horror film (with some deliberately-B special effects), Cemetery Man also a grand philosophical meditation on love and death, dream and reality. It is thought-provoking and artfully constructed—to the select few of us who get it; most viewers don't. (Perhaps they are turned off by Gnaghi's romance with the severed head of a young girl?) In any case, I am for some reason proud when I can get anyone to watch it. And a few weeks later, I gathered most of the ranch staff to see another wonderful movie that almost no one has seen: Fantastic Planet or La planète sauvage (1973, directed by René Laloux). I suddenly have a few achievements as a film-educator. Perhaps I should update my resumé.
My visit home has granted me access to my grand archive of artworks from my past. And so I will share one with bright colors, which seems fitting for the holiday season: 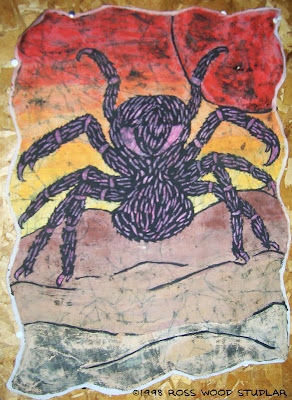 This painting would be of Espigah, my tarantula, whom I kept in captivity for around 18 years, until she finally shed this mortal coil last year. Leaving Bud the pacman frog as the last survivor from the pets from my youth, which my mom has so graciously and skillfully cared for since I left home.

~ And may your holiday season extend BEYOND New Years' Day ~

Big Willy isn't the only animal out there with food on the brain. Well, food is a primary concern for most animals (including humans), but some critters, like Big Willy and Bud take 'living to eat' to a higher level.

Bud, my pac-man frog, whom I have had for 15 years, has been the inspiration for many pictures and stories. He sits motionless in a hole in the mud for days. Then, when a live earthworm or insect is offered, he launches the attack. Snatches the victim in his jaws and devours it. Onlookers are always surprised--to see the amphibian transform so suddenly from statue to pouncing tiger. And Bud will attack anything that moves (including your hand), will eat any animal he can swallow, and has no taboos on cannibalism, if given the opportunity. Some of his wild relatives die by choking, when they try to swallow prey that is too large. All this makes for a character as fantastic as those dreamed up by Jack Kirby or Steve Ditko! Although I cannot claim their level of skill at rendering such a character on the comics page, I try my best. As such, I recently completed my second Bud-inspired comic story, which is titled "The Threat of Big Bad Bo." It is a sort of parody of the Marvel monster comics of the 1950s, with a pac-man frog as the monster. On display above is the opening splash-page, which is followed by four more pages, dense with action in a nine-panel grid. (My first Bud-inspired comic "Song for a Hungry Horned Frog"--which takes a more contemporary dramatic approach--is available on iknowjoekimpel.com.) Soon, I will collect these and other stories into a comic book of "Frog Stories." Watch for it in the coming year, true believers. 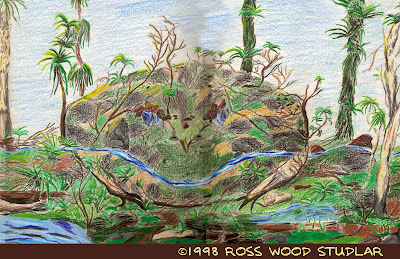 In a recent visit to my parents' house, I uncovered this colored pencil drawing from my high school days. It depicts a giant Bud, hidden among the swamp-plants. A nice reminder that I have been drawing the ol' frog for many years. (And was drawing him impressively well when I was a teenager.) In my visit, I have not had the opportunity to greet the real Bud, for he is buried under mud for his winter sleep. He sleeps for many months out of the year; and the duration of the long nap has increased with each passing year. However, when he does emerge, he is as vivacious as ever. His appetite is not quite as great as in his younger days, but he is still a horrifying predator, to any animal small enough to be engulfed in his jaws. We keep wondering how long the amphibian can live, and thinking that every winter will be his last. And then he surprises us again when he emerges, late in the spring. Whenever he does go to the great mud-hole in the sky, he will be remembered, in pencil and ink.
Posted by Ross Wood Studlar at 7:56 PM No comments:

Being overdue for a blog post, I looked through my archive of drawings—and found this porcupine on scratchboard. Evidently, the animal and the medium complement each other well. I seem to have captured its handsome but deadly coat of quills. The peaceful forager, who is armed like a battle tank. The cute mammal who can make an impaled corpse of any predator who dares to attack him. Few will take the chance. The assailant must target porky's achilles heel—his unprotected head. A single mistake can spell the end.

Speaking of “the end”, we have had some intense events at Rock Bottom Ranch, and some fine animals have met their end. I will post about these events soon—I am still gathering my thoughts.

Good fortune, my viewers!
Posted by Ross Wood Studlar at 7:42 PM No comments: