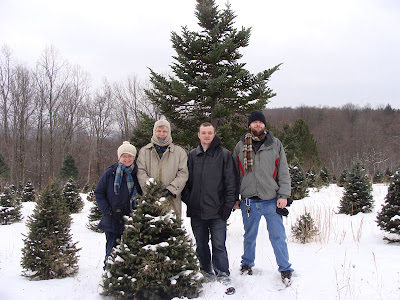 I hope that everyone had a Merry Christmas (or a merry whatever-other-holiday-you-celebrate), and will have a Happy New Year.

I celebrated Christmas with my family in West Virginia. My brother Carl and I arrived on December 24th, just in time for the whole family to partake in a tradition of ours, acquiring a real Christmas tree from a local cut-it-yourself tree farm. We chose a fraser fir (an authentic Appalachian species).

Regarding the perennial debate over which is better (or worse) for the environment, a real Christmas tree or an artificial one... Research demonstrates that a real tree is clearly the more earth-friendly choice (1)(2).

And speaking of the environment, here is another educational comic from the pen of yours truly. This one I created in the fall of 2003, during my senior year at Dension University. Throughout my time at Denison, I was involved in DURP (Denison University Recycling Program). Due to great organizational efforts by some other DURP members and university staff, the institution greatly expanded its recycling program in 2003--introducing, among other things, recycle containers for every dorm room. But there was a problem: many students did not follow proper recycling protocol. We faced recycle bins contaminated with non-recyclable garbage, and various other issues. To address these difficulties, I created this instructional comic/ poster.

Boris, the star of the story, is DURP's long-time mascot. I do not know who originally created the character.

My comic still graces some walls at Denison, thanks to the efforts of current DURPers. It may be the second most widely-viewed media work of mine, after my earthship video.

Here is the second of the two educational/ instructional comics that I produced for ICLAD. This case deals with the problem of a high dropout rate in Marshallese Schools. Analysis revealed that the schools' strict policies on attendance and timeliness were counterproductive, if keeping students enrolled through graduation is the goal.

Posted by Ross Wood Studlar at 11:53 AM No comments:

I produced this educational comic for the International Consortium for Law and Development (ICLAD). It illustrates the "Seidman Method" for addressing social and environmental problems. In this example, the problem at hand is a Charles River contaminated with motor oil....

Posted by Ross Wood Studlar at 6:21 AM No comments:

I am currently in an intensive EMT course, and intensively studying for the big National Registry exam. Still, my speculative imagination is at work, somewhere in the background.

After reading the chapter on emergency childbirth, inspiration struck, and I ran for my sketchbook. I envisioned a woman giving birth to an evil space alien. With brush and ink, I placed this nightmare on paper. It is one of the most shocking and graphic images to come from my brush, "for mature readers," I must warn. Granted, you have probably seen worse in horror movies.
To view the image, click here.
Posted by Ross Wood Studlar at 6:50 PM No comments: