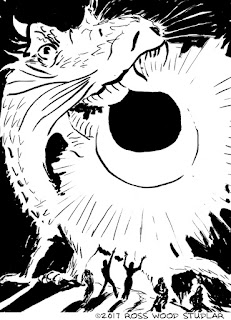 I looked to the sun through my special lenses, and it looked as if a cosmic Cookie Monster had taken a bite out of it. I could see why both the Chinese and the Native Americans tell stories about a dragon or a frog that devours the sun. The word ‘eclipse’ means ‘abandonment’ in Greek, and before astronomy had advanced to the point of explaining the eclipse, it was met with dread that the sun was abandoning the earth. For the Great American Eclipse of 2017, which I viewed from Yellowstone National Park, the mood was more joyous than fearful. The fears I had carried included that cloud cover might prevent us from seeing the eclipse, and that I might have to respond to a dehydration or cardiac patient during the eclipse, preventing me from seeing it. Thankfully, we had a clear blue sky on August 21, and no medical calls. I took my first glimpse of the eclipse from outside the ranger station at Madison junction. From there, I rolled in the ambulance with fellow ranger Amy to her normal work station, the Madison visitor center. We met a throng of tourists, scattered throughout the parking lot and the field by the Madison River. The American flag flew before the historic visitor center, built of great pine logs. In the distance elk munched on grass. Closer by, men and women tilted back in their camp-chairs, and looked skyward through their eclipse glasses. Children chased each other back and forth—when we get older, it can be too easy to forget this obvious use for an open field. 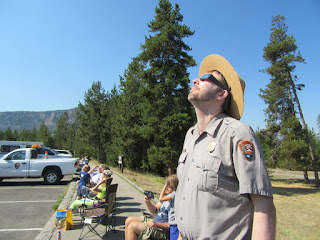 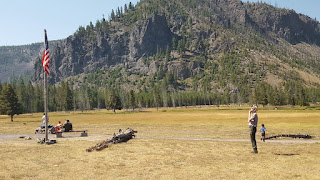 One family used a colander for an eclipse pinhole-viewer, and it worked well. The shadow of the moon advanced over the sun. The sun reduced to smaller and smaller crescent, until it was only a thin sliver. The sky shifted to a darker blue, and the yellow grass of the field turned to orange. Long shadows were cast on the landscape, from the human figures, the trees, and the flagpole. I raised my camera to take a photo, and it kicked automatically into sunset-mode. (A simple AI had interpreted what was happening.) 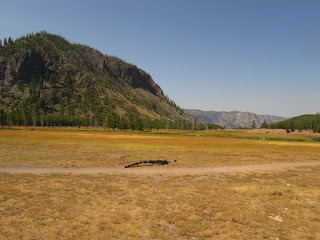 A chill wind blew. I heard the voice of a seven-or-so-year-old boy asked his mom, “Why is it getting so cold?” Near the peak of the sky’s dome, another point of light emerged—the planet Venus! We were not in the path of totality, so were not privileged to the full effect of nightfall in the daytime. This was the closest we came. The sliver of sunlight moved to the top of the sun, and slowly the crescent of sun enlarged again, as the moon’s shadow moved away. The moment the sun began its return, the persistent dull roar and whoosh of traffic returned. To me, the eclipse was not over until the sun resumed its full form; but many tourists obviously saw it differently, taking to the road the instant our star began to return. 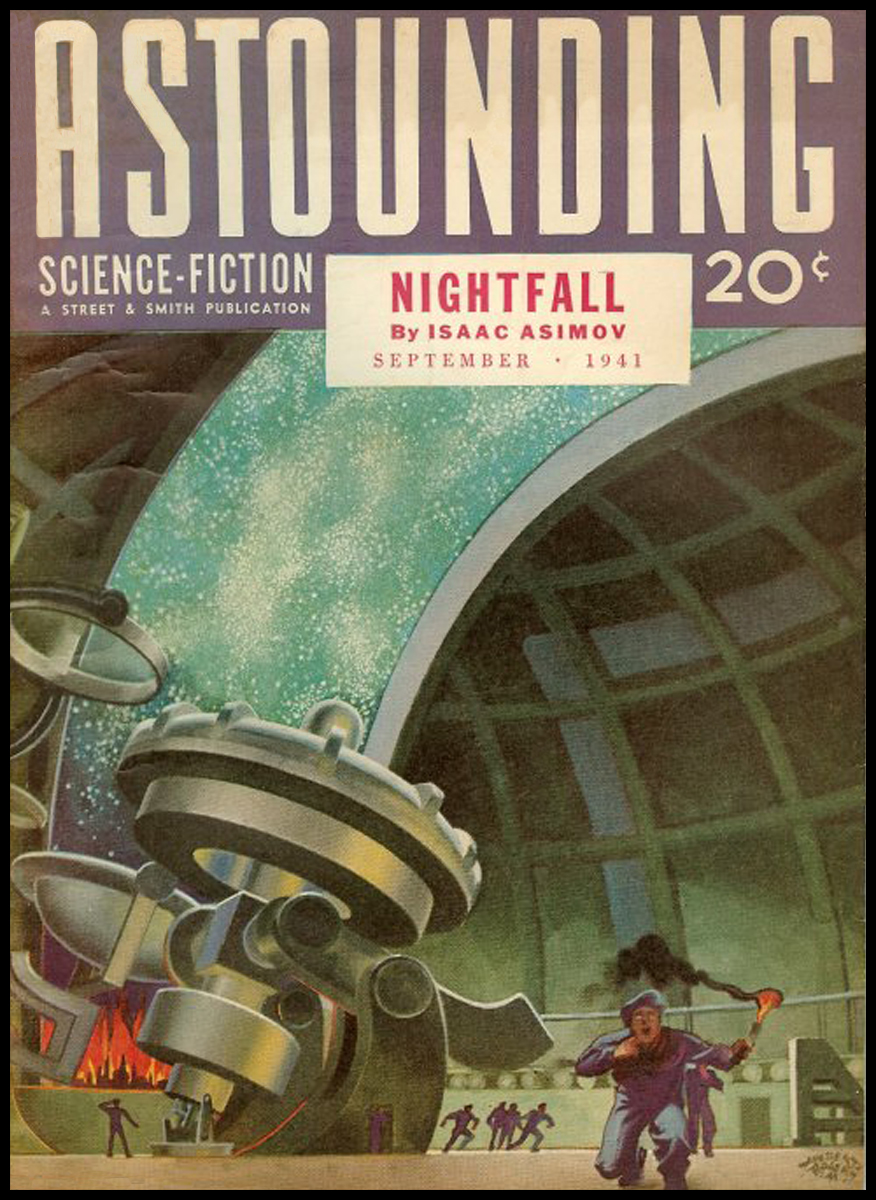 As the eclipse approached, my imagination inevitably drifted back to the planet Lagash. Considering how much fear as an eclipse can elicit in a world where darkness comes every night, imagine what effect it would have in a world that is otherwise bathed in perpetual daylight! This is the premise of Isaac Asimov’s groundbreaking science fiction short story “Nightfall,” first published in the September 1941 issue of Astounding Science Fiction. Taking place on Lagash, a world much like earth with inhabitants who seem just like humans—except that Lagash is lit by six suns, so its denizens have never experienced the dark of night. Once every 2000 years or so, the moons and planets in the six-star system line up just right so that the dark of night comes to Lagash for about half a day. This time, as nightfall approaches, a crew of scientists with telescopes attempt to unravel the mysteries of the universe and interpret what is to occur. Having had no night sky to work with, their grasp of astronomy is rudimentary, but they are on the road to understanding nightfall as an astronomical phenomenon. Meanwhile, religious zealots siege their observatory, demanding repentance before the end times. Their "Book of Revelations" contains some records handed down from survivors of a previous nightfall, who speak of stars (whatever those are) that will emerge from the dark sky and rob men of their souls. All this takes place in anticipation of the raw panic that is going to ensue when Lagash is bathed in darkness. Civilization may not survive.

Richard Lea, writing for The Guardian in 2012, notes that the conflict between science and science-denial brought to vivid light in “Nightfall” is even more relevant today than it was 70 years ago, as global warming threatens to destroy much of civilization, and many powerful people deny the science. I note that climate-deniers are driven less by religious belief than by the knowledge that addressing the climate crisis will compromise their profit margin. And most politicians and mainstream commentators who do acknowledge climate change propose solutions that are woefully inadequate. On some level, we are all in denial of the coming storm.

Astounding cover by Hubert Rogers, originally published by Street & Smith publications, and I'm not sure of its current copyright status. Low-resolution reproduction used here for educational purposes only. Photos of Ross by Amy Rether.
Posted by Ross Wood Studlar at 11:22 AM No comments:

Ode to the Buffalo Bull 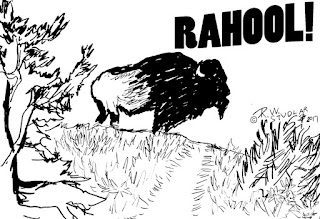 Bison are the most reliable beasts in Yellowstone. Nearly 5,000 in number, they are commonly seen from the valleys and overlooks, by the rivers and by the roads. They scratch their great heads upon trees to deal with insect pests, rub off the bark, and leave scars across the forest, which everyone misattributes to bears or elk. On a misty morning in August, the bellows of the bulls echo across the plains like a rumbling volcano. As the mist rolls away in the rising sun, the battlefield is revealed. Hundreds of bison in the valley below. A bull trots beside a cow, sniffs her rear end, waits for her to come into heat, roars across the plains, telling other bulls that this one is MINE. His hold lasts only as long as he can keep other bulls away, by intimidation or by force. The cows swear fealty to no partner. Their criteria is simple: the best fighters are the most attractive. He who dominates others of his kind will sire many children whom he will not know. For the life of the bull bison is solitary, walking with the herd when convenient, walking alone when convenient, eating grass all day, tolerating others of his kind when sharing the meadow. In the prime of health, he has little to fear. At 2,000 pounds, with a battering ram for a forehead, swords in his horns, and knives in his hooves—grizzly bears and wolves keep their distance and search for easier prey. The bull eats and walks and stays out of trouble, until the next mating season. Then the fury of testosterone consumes him again. All of his weapons are at the ready, but his opponents are equally armed. Corpses litter the field at mating season’s end, the result of those fights in which both adversaries refused to back down. And this attracts beasts that are normally harder to see. Grizzly bears appear on the field, thankful for the scavenged feast, in time to prepare for winter hibernation.
Posted by Ross Wood Studlar at 10:51 AM 1 comment: