From out of the basement, the Bogosaurus awakens!

I made this papier-mâché sculpture when I was 16; ’twas a project for a high school art class. Now I have reunited with the beast, after it had long been dormant in my parents’ basement. At the time I laid down the flour-soaked strips of newspaper, I referred to the sculpted alien as simply “my creature.” Evidently, I am long overdue to give this creature a name and a story. I am working on that now. Tentatively calling it a Bogosaurus; and it’s first issue is forthcoming! 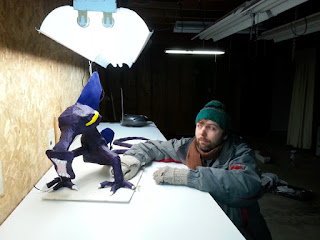 When the whole Studlar family moved out of our old home in West Virginia, I thought that could not keep the sculpture. It’s combination of length and height made it wholly impractical to transport by way of our rental vans, which were already overloaded with stuff. In the final move-out, I had played an insane and exhausting game of “Tetris” in the vehicles. I filled suitcases with books, nested containers in containers like Russian dolls, stuffed all empty spaces with soft things like clothes, put items like staplers and surge protectors under the seats, and arranged and rotated every piece of the puzzle in an effort to use every millimeter of available space. It was around midnight and the snow was falling outside. Weary from the protracted effort and with sore forearms from all the stuffing, I took my final photos of the creature under the basement’s fluorescent lights, thinking it would then join the trash pile, with the moldy clothes hamper and the cans of solidified paint. It seemed an undignified ending to such a memorable creation. But my dad proclaimed that we could keep the creature. I declared that impossible. He suggested putting it atop the load; I objected because that would prevent the driver from seeing out the back. He suggested the car-top carrier; and I noted that it was already full of stuff. Then I had a flash of insight. Or maybe a solution this obvious is not worthy of being called insight. I got out my pocket-knife and cut the creature’s tail off. The long tail we put on top of the load in the back of the van. The body we placed in the front-seat, where there was just enough room, amidst the driver’s overnight back and snack food and CDs. Upon arrival to our new home in Asheville, North Carolina, I taped the beast back together. It now stands proud atop the mantle. I am working on inventing its science-fictional biology.