Encounter with a Wild Tarantula

By evening at Carlsbad Caverns, people gather about the outdoor amphitheater before the cave's natural entrance, to witness the nightly mass exodus of Brazilian free-tailed bats. When conditions are right, a spiraling funnel cloud containing hundreds of thousands of bats emerges from out of the cave, and rises high into the purple and orange sunset sky. I have not yet witnessed the “bat tornado” in its full glory; bat flights this year have, thus far, been on a smaller scale; some have included a thin but steady stream of the flying mammals. (We do not know the reason for the smaller number of bats, but drought could be a factor.)

At the outdoor amphitheater, some people (especially children) are often distracted by another denizen of the desert. A brown hairy beast, gigantic—for a spider. Tarantulas commonly pass through the theater, or stop for a rest from their evening prowl. Male tarantulas are especially common, as they make their walkabout in search of a mate. Their partnership will be brief. After mating, the male must flee from the hungry female.

I have, a few times, joined the tourists and pointed my camera at the great spiders. I followed one for a good walk, in search of a better photo. And then I found myself, and the tarantula, right outside the door of the men's restroom. I thought this a potentially dangerous spot for the arachnid. A man's boot might squash the poor beast, accidentally or on purpose. And so I pondered how to relocate the spider. When I was ten years old, I acquired a Chilean rose tarantula, whom I named Espigah, for a pet. I sometimes “held her” by allowing her to crawl on my hand. Luckily, I decided not to attempt the same technique in this setting. Instead, I tried sliding my boot next to the tarantula, to encourage him to move. Evidently, the spider thought my intentions were hostile, and responded accordingly. He rose up, with several front pairs of legs in the air and fangs on display, the classic tarantula threat posture. I needed a different strategy. I thought that perhaps I could slide a newspaper under the spider and move him without causing disturbance. As I reached the newspaper towards the arachnid, he rose in threat again and struck the paper with his fangs. The bite sent vibrations through the pages to my hand, a safe distance away. I decided to leave the spider be, to fend for himself should the need arise. Perhaps I had discovered a difference between wild and domestic tarantulas. This fellow seemed to be more inclined to defensive reaction than my pet tarantula was. (Although Espigah did once throw a cloud of urticating hairs in response to a girl's scream.)

Understandably, I had started the confrontation, as far as the spider was concerned. These hairy beasts are quite harmless, when left unmolested. (And even if they are provoked to bite, the venom has no serious effects, for most people.) They are a joy to observe, in the desert wanderings, with their smooth coordination of all eight legs, which suggests a slow jazz rhythm.

Like all animals, tarantulas must eat. From time to time, their fangs sink into beetles or crickets or small lizards. In the right circumstances, small mammals are also fair prey. And so I have drawn a tribute to the big spiders, with their skill at predation. On the sand and rocks, in the cool desert night, beneath the light of full moon, the tarantulas thrive. Like the cacti and the bats, the ring tails and the roadrunners, they are an essential part of the desert.

Posted by Ross Wood Studlar at 10:23 AM No comments:

Have sketchbook, will travel .... to the Chihuahuan Desert

For the past month and a half, I have been quite immersed, enmeshed, and embroiled in the amazing natural resources of New Mexico, the land of enchantment. Soon, I shall have much more to share about the new and stunning landscapes of deserts and caves. For now, several sketches, all “drawn from life.” The resting kit fox and alert elf owl are from Living Desert Zoo and Garden State Park. Of course, Carlsbad Cavern resides at its namesake, Carlsbad Caverns National Park.

Excelsior. I shall return. 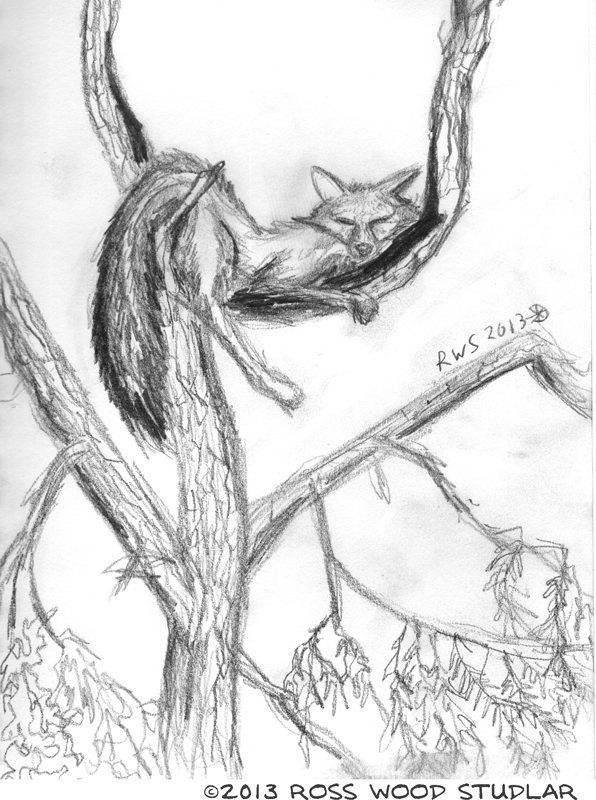 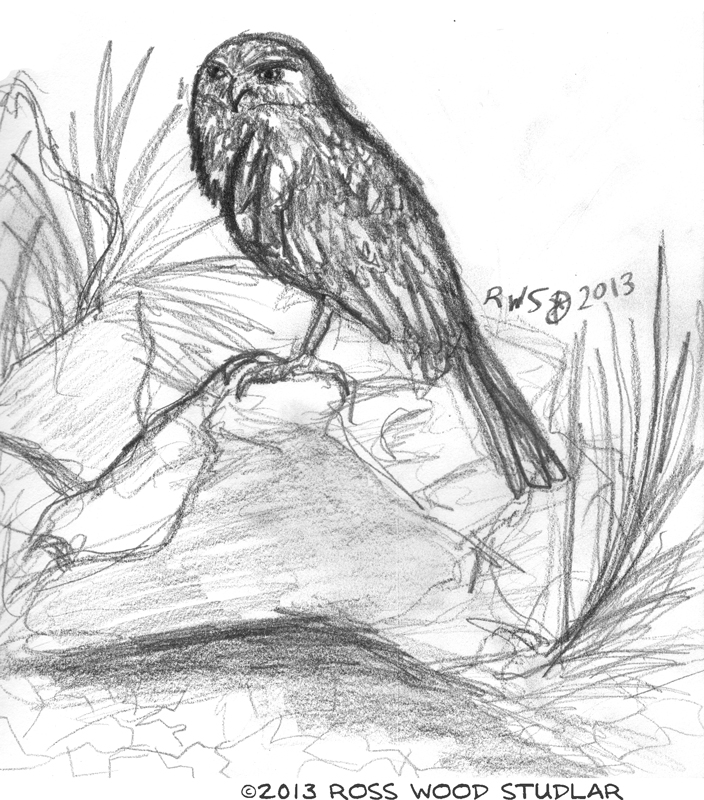 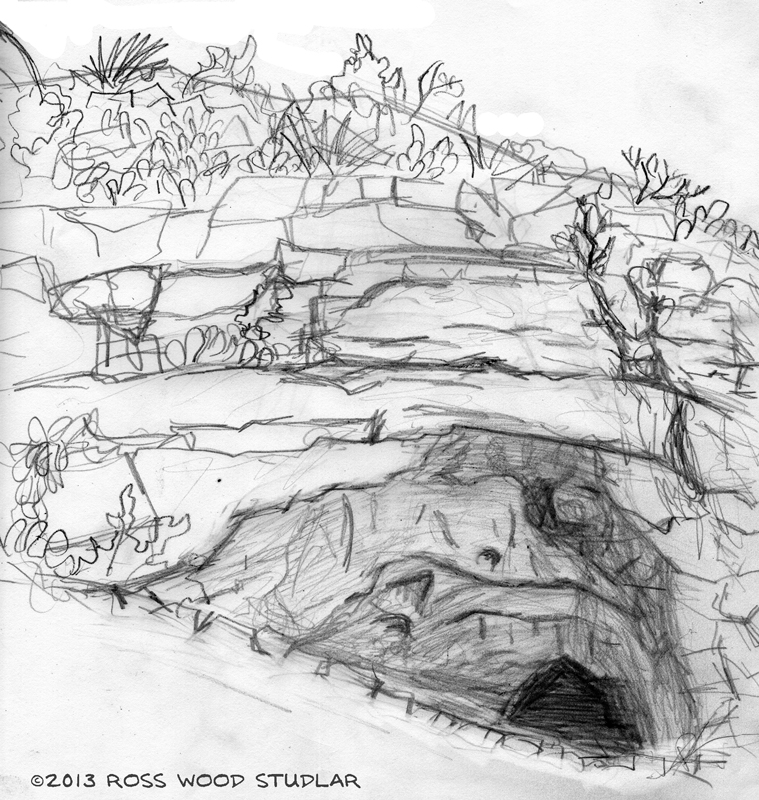 Posted by Ross Wood Studlar at 3:18 PM No comments:

The Resilience of Junipers and Condors 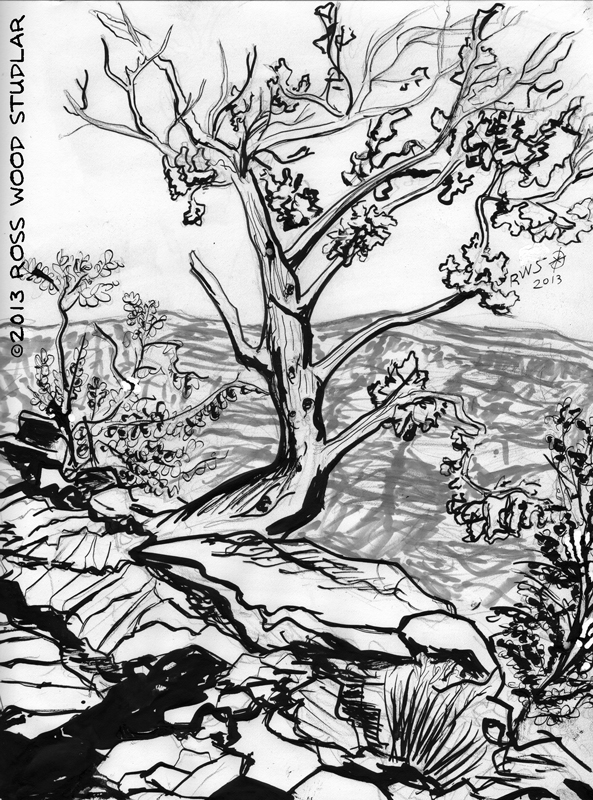 I stood at the rim of the Grand Canyon, with the wind ruffling the pages of my sketchbook and threatening to remove the hat from my head. I was on the ledge below the Kolb studio, a popular spot for travellers to gather and gaze into the great abyss. The knotted, bending form of a Juniper tree caught my eye, as it stood before me on the ledge. It stood proud in the sun and grew upwards towards the sky, despite the twists and contortions that years of wind and snow and heat had delivered upon it. The tree was resilient, like my grandmother, whose spirit remained young even as her body aged. I attuned my eyes to the subject, and attuned my pencils and ink to a new page of my sketchbook. With so much detail in nature and the lighting constantly shifting, I experienced 'drawing from life' in its pure form, and faced the same artistic and environmental challenges as the explorer-naturalist-artists from days of yore. Plus the additional challenge of interuptions from tourists, to say 'wow, I like your drawing' or 'that's different.' To them, a man with a sketchbook must seem odd, anachronistic, like a pedestrian in an American suburb. (Albeit I saw several other artists, with watercolors and acrylics and things, along the rim of the canyon; and one can pass through many an American suburb and never see a foot-traveller.)

Suddenly, a great black shape glided overhead. A California condor, the giant bird, the American pterodactyl, swooped past us and into the Canyon. And I joined the crowd of gawkers; we rushed to stone wall in front of the edge and leaned over, to peer into the chasm, as far as we safely could. A few hundred feet below us, the condor sat on a rocky ledge. It spread its wings, like a man awakened from a nap, stretching his arms wide and far and greeting the waking world. Then it folded its wings again. And it watched. Unconcerned about the mile-deep chasm right below it. With patience and peace of mind to beat a buddhist monk, the bird surveyed the landscape. This grand bird eats carrion, like its cousin the turkey vulture. But the condor lacks it's cousin's acuity of smell, and so must rely on its eyes to seek food. And so it watched the landscape, around and below. It would take flight again when ready, perhaps in minutes, perhaps in hours. Meanwhile, tourists gathered all around the canyon ledges, and pointed their cameras at the bird, everything from cell phones to telephoto lenses. My own camera displayed a surprisingly good long-distance zoom (which a friend would later use to photograph a bighorn sheep on the distant cliffs.) And we all waited in suspense, for the bird to take flight, to see the huge wingspan put to power. We waited and photographed and waited and photographed. When I finally decided to move on to other sights and sounds, and turned around, the bird took flight. I caught a glimpse of its black form as it vanished into the distance.

The bird displayed a number on its wings for identification, for the scientists who track the giant flyers. After people with guns and lead bullets, pesticides and toxic debris drove condors to the brink of extinction, people now work to bring them back. The condor reintroduction program includes scientists and citizen volunteers, representing a coalition of government and non-government organizations. They are armed with GPS trackers, telescopes, hiking boots, passion, and supreme patience, for watching and tracking the behavior of the great flyers for days on end. The condor we saw is the result of a successful restoration and re-introduction program. Birds were raised in captivity and released to the wild. Once back in their native skies, the birds took flight and adapted, found mates, and raised young. I hope that the success continues, and these great birds continue to amaze us, as they soar over the canyon, and cast their shadows thousands of feet below.

Later, a wise park ranger informed me that my chosen juniper was possibly the most photographed tree in the park. Evidently, this bit of resilient life had struck a chord for countless travellers. It takes spunk and pluck and spirit to survive the canyon; and these trees and condors met the test and went beyond. Through heat and cold, snow and drought, wind and lightning, they thrive. 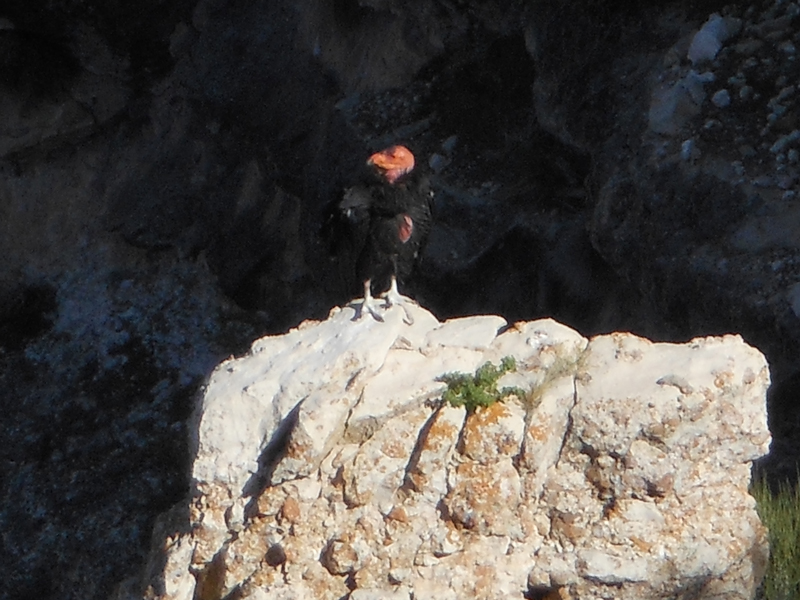 Posted by Ross Wood Studlar at 7:20 AM No comments: