With Halloween at the near, I ought to share something spooky.

On a recent hike along the Rogue River beginning near Union Creek, my comrade Lesley—who has the eyes of an owl—chanced upon an abandoned hornet's nest, on the ground, having fallen from a tree, and now withering away. Instantly, I noted that it looked like the face of a monster, or zombie perhaps. And Lesley expressed a desire to see my depiction of said creature. After a few sketchbook attempts at beasts with the layered carapace of the hornet's nest, I came upon “Hornet Woman."

I am considering making her the subject of a comic book. She has potential.

All autumn at Crater Lake, I guided children on school field trips through a forest of hemlock trees and—yellow jackets. In the warm autumn, the stinging insects were prevalent. On cold days, they slowed to a torpor. For many insects, weather has a direct impact on behavior, including activity and breeding. In our modern era of global warming, we have increased populations of mosquitoes and the diseases they carry. And the whitebark pines featured in my previous post are getting devoured by mountain pine beetles, who are in a population boom, thanks to climate change.

While bees and wasps are rather non-agressive, and not to be feared, they may be an indicator of something truly ominous.

I hope that we come together against global warming, before it's too late.

Through the forest and into the snow

Recently, I and my comrade Emily paid a visit to Scoria Cone. On the southern end of Crater Lake National Park, nestled in the old growth forest, Scoria Cone, like the rest of the Cascade mountains, was formed by volcanic heat and violence. Now, it is the land of perpetual snow. No trails or signs lead to Scoria Cone. To get there, one must venture into the conifer forest, with only map and compass as guide. (We didn't bring a GPS.)

We walked for an hour or so on the Pumice Flats trail, and the heat of exercise countered the cool of the fall morning.  We walked until there was a clearing in the pines and firs, enough of an overlook to see the mountain peaks behind. Using the area maps, we determined that the tall one was Scoria Cone. We took a compass bearing and followed it. First we went downhill, surrounded by lodgepole pines, which quickly obscured the broader view of the landscape. We followed our compasses, past a place where the lodgepole pines had bent over under snow, to look more like “arch pines”, or like monks bowing in a prayer circle. We walked on.

Away from highway 62, the forest was quiet, save the occasional croak from a Raven, or the yank-yank-yank of a nuthatch (which sounds like a truck backing up, as I learned from a wise birder.) We kicked up dust as we walked, for the ground was dry. Barely any rain had graced the landscape in months, but the hardy pines and firs stayed evergreen, like their namesake. From time to time, a shy chipmunk ran across our path and disappeared again. I'll admit to a slight nervousness, being away from the safety of the trail. Would I find the way back? Would I be lost in the woods, and have to put some wilderness survival techniques to work? I recalled Survivorman's cool attitude, and tried to imitate.

Our walk took us back upwards, towards the peak which we believed to be Scoria Cone. As the landscape came back into view—including in the distance, familiar landmarks like Llao rock and Mount Scott. This put my mind at ease. Crater Lake National Park has become to me a sort of home to me, and these landmarks give a sense of security, like the arch for residents St Louis, or the space needle for Seattle-ites. We walked past a healthy pile of bear scat, whose author had feasted upon berries and plants. We walked to the top of Scoria Cone. Just below, a bushy Ponderosa Pine stood proud and defiant, growing from out of the dark red rocks. Emily examined the map and determined locale of the crater, and the “snowcone”. We walked around the Ponderosa and down below it. And then we saw the pit, like an inverted cone. In the middle of the pit, snow. 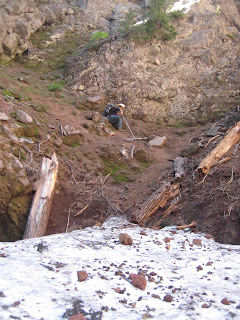 Slowly, carefully, we edged down the steep walls. Near the end, I had to slide a bit on the seat of my pants, similar to the maneuver of the first white man to touch the water of Crater Lake. For the final stretch, a log acted as walkway between crater walls and snow, with one problem. The log was occupied by a yellow jacket nest. We edged past the log, and jumped onto the snow. A thick layer of snow. Below our feet the snow went on for tens of feet or more. Emily wondered how much snow must pile in the crater in the winter, for so much snow to remain now. It was chunky, icy snow, the kind that would draw blood if you fell into it at the end of a sled run. A Clark's nutcracker visited us on the snow. The bird pecked at the snow, and flew off. By my best observation and estimation, the bird ate chunks of snow as a source of water. A wise technique in a dry forest. Constantly, in fact, birds flew into and out of the cone. Nutcrackers and nuthatches and gray jays and stellar jays came along. Wasps and yellow jackets buzzed around us, so I made no sudden moves. We took some photos, and climbed out of the crater, free from stings, and with only the slightest of scrapes from the sojourn into the unknown. We followed our compasses back to the trail, where Emily set out for her new destination: Stuart Falls. I stayed along until the next grand view of the landscape, then was ready to turn around, having had a long and vigorous hike, and having met my goal of reaching Scoria Cone.

In her hike to Stuart Falls, Emily encountered a small bear. The beast ran in terror, climbed a tree, and howled and mewled like a dying puppy. I was envious and regretted having missed the bear. But I was prompted to fashion a bear with my oil-pastels. To join the mammal, I included another icon of western national parks—the whitebark pine. This high altitude tree is symbiotic with the Clark's nutcracker, who both eats and distributes their seeds. A nutcracker's thanksgiving would include volumes of whitebark pine nuts, some flavorful insects, and, evidently, a bowl of icy snow. 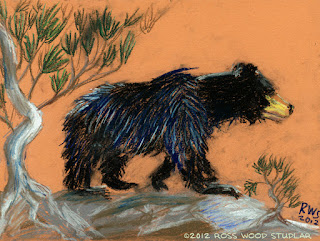 Posted by Ross Wood Studlar at 12:10 PM No comments: