A Year for Parks

The year 2016 is the one hundredth anniversary of the National Park Service! For the past few years, the NPS has teamed up with the nonprofit National Park Foundation to promote this centennial. The promotional poster below (composed by their graphic artists) is neat and befits the event well: 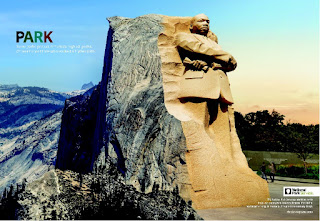 The year to celebrate public lands began with men in cowboy hats challenging the very concept of federally-managed public land--in the form of the armed occupation of the Malheur National Wildlife Refuge in Oregon by an armed militia led by Ammon Bundy. Apparently, the Bundys have a utopian vision of a world where the Grand Canyon of Arizona is a giant uranium mine, and one can no longer hike and fish in the National Forests of Oregon, without fearing gunfire from the logging companies to whom ownership of the forest has been transferred. For the record, I put my boots on the ground and markers on the paper in opposition to Y'all Qeada, in a protest at Holladay Park in Portland, Oregon. (The Audobon Society, Center for Biological Diversity, and others worked to organize the event.) 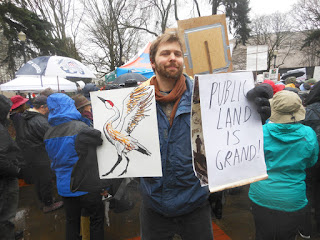 There may be more challenges to public lands, and more armed crazies to come. At least one of my fellow seasonal rangers has told me she is nervous about returning to work at Yellowstone. In response, I noted that national parks carry many calculated risks, including earthquakes, lightning strikes, and falling trees. The Yee-Hawdists are another one, but we must temper our imaginations with reason. The leading causes of death in national parks are drowning and automobile accidents. (And no public employees were harmed physically in the Oregon standoff.) And, of course, terrorists seek to strike terror, so we must not allow them to scare us away.

Now is a great year to flood public lands of all types with your support.  I especially recommend going and playing in some of the not-quite-as-famous gems (such as Crater Lake, Timpanogos Cave, and Chaco Culture.) Yellowstone, Yosemite, and Grand Canyon will be PACKED this summer, so if you go, make good use of the early morning and late evening.

Recommended: Comments by Tim DeChristopher (who went to jail to protect public land) on the Malheur standoff.
Posted by Ross Wood Studlar at 8:24 PM No comments: