Curious that, right after I post some thoughts about intelligent thinking-machines, IBM's computer Watson soundly defeats the two best human players at Jeopardy. An astounding move forward for computers in understanding human language--which is a feat that continues to challenge even the most sophisticated silicon-based brains.

It seems almost a shame that Isaac Asimov did not live to see this event. However far-fetched it may be, the premise of "The Last Question" now seems slightly more plausible.

It is interesting to note how in discussing Watson's significance for the future, people refer to science fiction works. David Ferrucci, IBM researcher who led the development of Watson, urges us to compare the electronic Jeopardy champ not to the villainous Hal, but to the wise and helpful computer on Star Trek. In a similar vein, the novel Brave New World and movie Gattaga are frequently cited in discussions of the impact of human genetics on the future. Scientists may love or hate these cautionary tales, but cannot avoid them, and the vivid images they create in the minds of the public.

sneak preview (above). Image from my upcoming (not-yet-titled) SF comic book.
Posted by Ross Wood Studlar at 10:15 AM No comments:

One of my childhood ambitions was to become a paleontologist, to study dinosaurs. A competing ambition was to draw comics for Marvel. I haven't met either goal. In recent years, I have shown greater interest in living animals than extinct ones. Maybe my paleontological dreams have vanished like the great sauropods, or maybe they have simply morphed--evolved--into something new.

Among my sketchbooks and comic book productions, we find a variety of reptiles, as well as their relatives, the amphibians and birds. Among these, we find modern giant reptiles, such as sea turtles and Komodo dragons. Some biologists have described these creatures as 'living dinosaurs.' 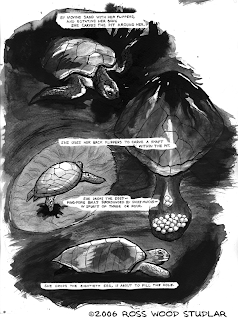 Last fall, I encountered a giant amphibian! (Almost a living dinosaur?) It was a giant coastal salamander. Although considerably smaller than me, it was a leviathan by salamander standards, nine inches in length (and they can get bigger.) I chanced upon this critter on a rainy day hike, in a forest just outside Portland, Oregon. Northwest dwellers, these great beasts may be lurking in YOUR backyard, unbeknownst to you. Dear salamander, it is an honor to share the forest. 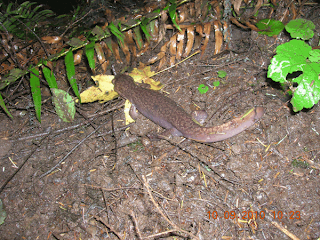 Posted by Ross Wood Studlar at 5:15 PM No comments: Most of us don't think of the folktale of John Henry as a science fiction story. But, in a sense, it is one. It is a story about how new technology affects people and society. At the time the story was invented, strong men were feeling the new competition from stronger machines. Today, we take it for granted that a forklift can lift more than the strongest person in the world, and that a bulldozer can move more earth in a day than a person can in a month.

Today, humans have another (greater) source of pride with which machines are competing: our brains. And so, not surprisingly, many science fiction stories on computers and robots deal in the question of what will happen when the machines become smarter than us. In the real world, the much-publicized Garry Kasparov versus Deep Blue chess match of 1997 was the intellectual equivalent to John Henry versus the steam-powered hammer.

Although computers can play mean chess, compose music, write poetry, and devise clever TV commercials, they can't yet do everything that humans can. I'll leave it to the philosophers, linguists, psychologists, and computer scientists to debate over whether they will match or exceed all our cognitive abilities someday. I simply know that such prospects are good material for science fiction. My SF comic book Myths from the Future contains stories about intelligent robots, and a great awakening, when robots become self-aware. And I have comic book in preparation (still untitled), wherein a humans brain is copied into a new cyborg body--although it isn't exactly the body he was hoping for!

Photo at top: statue of John Henry outside town of Talcott, West Virginia. Photographer Ken Thomas has released this image into the public domain.
Posted by Ross Wood Studlar at 4:53 PM No comments:

Comic book retailers take note: I have hired Tony Shenton as freelance sales representative for my Raven and Crayfish.

Comic fans take note: On the right sidebar, I have added links to retailers who are cool enough to sell my comics, as well as links to some other notable cartoonists and artists.

Comic people also note: Susan Soares of Sky Pirates of Valendor was nice enough to let me post a banner on their site. I'd better go read some Pirates!

Even though I am in what educators call the "millennium generation," I have been a bit slow to catch on to the world of online self-promotion. I am trying to catch up.

Hardly anyone foresaw the world wide web as we know it, and increasingly we forget what life was like without it.

Indeed, most predictions regarding computers of the future are famous for being so far off the mark.

The line from a 1949 issue of Popular Mechanics is frequently quoted:
"Computers in the future may weigh no more than 1.5 tons."

At the time the article was written, computers were giant, centralized machines. The author extrapolated from current trends. Science fiction did similarly. Most SF stories on computers from the 1950's and 60's feature super-versions of the early digital computers--whirling tape, vacuum tubes, flashing light bulbs and all.

ENIAC, built in 1946, was the world's first general-purpose electronic computer (according to wikipedia).
On New year's eve 2011, I was visiting family and presented a reading of Isaac Asimov's classic "The Last Question" (1956). It tells the saga of Multivac, the grand supercomputer on the moon (at the stories beginning), and its quest to solve for man the question of whether there is a way to reverse entropy and prevent the end of the universe. (The "AC" in Multivac or ENIAC stands for automatic computer.) In only 13 pages, Asimov takes the reader on a journey beginning in the year 2061, and ending trillions of years later. By a few generations from the opening scene, the planet-spanning Multivac has been replaced by Microvacs, miniaturized computers--each occupies only half a starship! Microvac later evolves to a universal computer, a cosmic AC. In the final scenes he is simply AC, existing in hyperspace, and instantly reachable from anywhere in the universe. Through calculation, the AC solves all man's problems until man discards the flesh, and his immortal collective mind roams across space. But still that problem of entropy vexes Man and AC alike …..

Although many of the details in Asimov's story now seem quaint, still he predicted that computer would become humankind's best friend ... a forecast for the "information age." That may be one of the reasons why "The Last Question" was Asimov's favorite of all the short stories that he authored.

Asimov mainly foresaw computers (and robots) as being used for peaceful purposes. Robert Heinlein explored more military applications, as with his giant supercomputer "Mike" in The Moon is a Harsh Mistress (1966). The self-aware computer is a likable character. And he is invaluable for aiming rock bombs in the war between the lunar colony and Earth.

Then there are the good computers that turn bad and take over. The most famous of these is HAL 9000--with his gently disturbing voice--from 2001: A Space Odyssey (1968). Colossus: The Forbin Project (1970) is another example. Notably, this film contains a short scene of a chess game between Colossus and the man who programed him. At the time, the idea of a computer that could challenge the smartest human in chess was wild speculative fiction. Now, it's history.

All of the aforementioned works deal in giant "super-brain" computers. None predict the decentralized international network of today.

As far as early and accurate predictions for the internet age are concerned, there is one story that tops them all.

"A Logic Named Joe" by Murray Leinster, 1946. ('Logic' is Leinster's term for what we now call a personal computer.) He forecast in the existence of desktop computers with screen and keyboard. The story goes farther from there. He offers a clear and accurate prediction of the world wide web, google, craigslist, Skype, concerns about the absence of censorship on the internet, and much more...fifty years before the fact, and at a time when the world thought of ENIAC as the pinnacle of computing. I first learned of this story from a column by Robert Silverberg in the December 2008 issue of Asimov's Science Fiction Magazine. I found the tale and was amazed. (You can find it at your library, or use your 'logic' to find it online.)

The lesson that I take from 'A Logic Named Joe': somewhere out there in science fiction, there is a story that seems too fantastic to believe, but that will come true. I just wonder what story it is!