Returned to Yellowstone, Surrounded by Wonders Large and Small 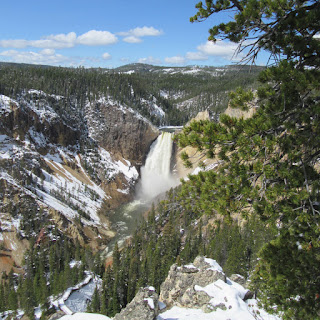 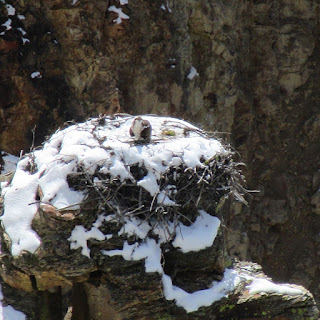 I’m back at Yellowstone. My first work day will be Sunday. My parents have come to visit the park and me before the work season starts. Today, the wildlife was out in abundance. In the valley by the Yellowstone River, the bison calves chased each other and frolicked, then trotted behind their mothers as they ambled through the pasture, munching along the way. 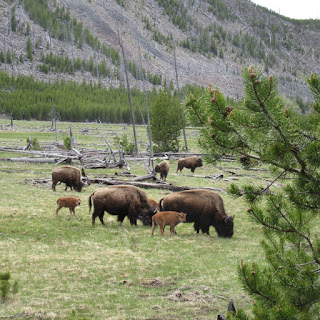 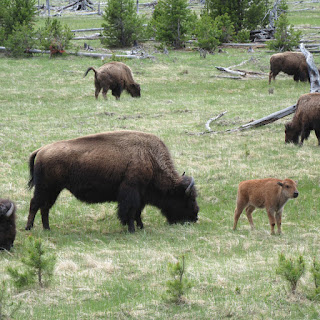 My mom (the wise botanist Susan Moyle Studlar) and I leaped from the car at stop after stop, and clicked away with our digital cameras. For most of the trip, my dad (Donley Studlar, political scientist of the world) drove, and took the opportunity to tilt back the driver’s seat and rest at most of the stops. Along the Lamar River, an osprey chick poked its fuzzy head out from the nest like a little periscope and peeped hungrily as it saw its mother soaring home, with fish in talons. By the bridge over the Yellowstone River near Tower Falls, a black bear sow and two cubs chomped on grass, ambled down the hill and hopped across the water. Their black forms disappeared and reappeared among the sage. 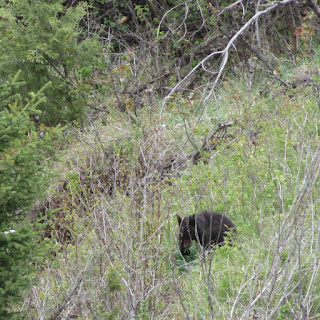 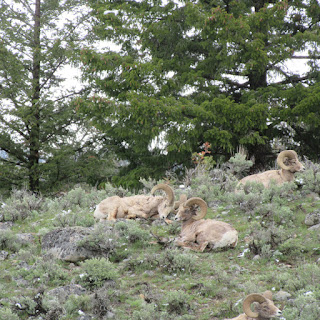 On green slopes in the Lamar Valley, with snowy mountains in the background, eight bighorn rams sat and rested, while a red fox trotted up and down and around in the foliage, listening and sniffing and periodically looking back over its shoulder. Farther down the road, we walked into the valley and saw pronghorns graze in the distance to the north. To our west, a coyote ran in a wide arc around a resting bull bison, perhaps cautious not to disturb the aggressive herbivore while hunting for ground squirrels. In a mucky place on the other side of the road, six mountain bluebirds alternately hovered and landed on the ground or on the sage. Remarkably, various wildlife photographers honed their telephoto lenses on the little beauties. 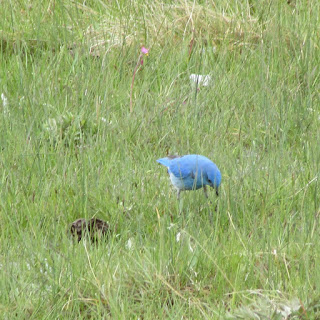 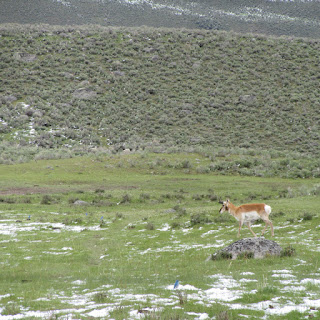 For the bears and the buffalo, the osprey and the bighorn sheep, the tourists pulled off the road in every which direction, and pointed spotting scopes and mobile phones. A young woman from China took repeated selfies with the rams in the background, as if the bighorns were insufficient as primary focus. Across the park, the animals carried on their wild behavior undisturbed, as the humans kept a healthy distance. Late in the day, I finally met two grizzly bears out together somewhere on the road between Mammoth Hot Springs and Norris Geyser Basin, and some Asian tourists approached the beasts at far too close a range, within ten feet. An international chorus of voices from other visitors called for them to back up. 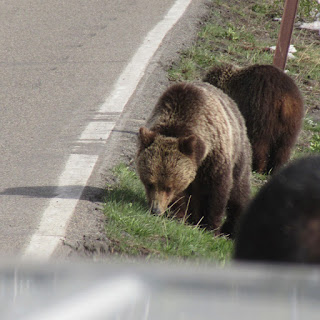 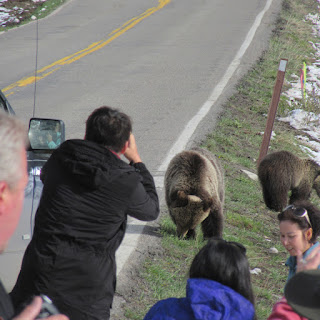 By a pond in Lamar, with binoculars and field guide, my mom and I worked together with two Frenchmen in black puffy coats to identify the ducks. There was a ruddy duck afloat, and a goldeneye diving and resurfacing. There were the familiar mallards, and the less-familiar harlequins. Guided by the wise botanist, we took special note of life forms that all the other travelers around us ignored—such as the monkey flowers and Eriogonum flowers and moss growing in the stark environment of Biscuit Basin, and the lichens growing upon a glacial erratic boulder in Lamar Valley. Although wolves and bears are worthy of all the attention that is lavished upon them, so many wonderful forms of life are not given their due. I hope that my fellow travelers can learn to stop and look at and smell the earth and witness the moss and small birds, in between waiting for an eruption of Old Faithful or driving up and down Lamar Valley in hopes of glimpsing a wolf’s ear behind a stump. 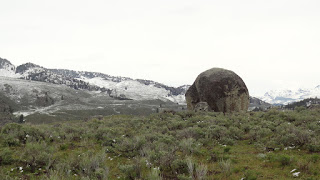 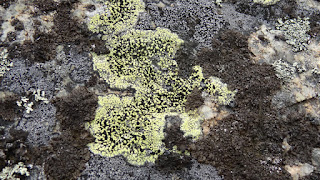 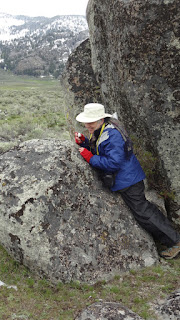 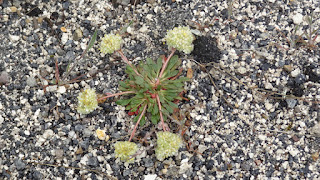 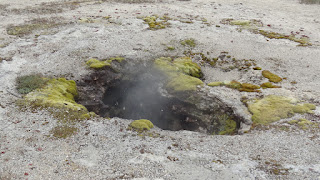 Back at the visitor centers and government housing areas, I met some familiar Homo sapiens. Many of my old comrades from past seasons of ranger work were back. I received hugs from Rosa and Dana, shook the hands of Michael and Corey and Mike. It’s seems like the months of November through April have faded into oblivion, and work and life in the Yellowstone community has returned, after a week’s hiatus. It is good to be back. And the return is made all the sweeter by the chaos of the winter months. On November 9, 2016, I thought that I might not live to see this day, that the newly-elected president might have started a global nuclear war by now. That is still a very real possibility and I remain concerned. But for now, I revere and revel in the wonders of the Yellowstone. 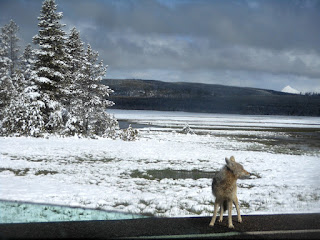 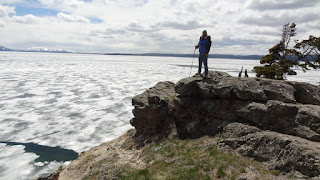 Touring (and blogging) as Civilian Ross, I had to maintain the ethics imparted on park visitors by my alter ego, Ranger Ross. Hence, I’ll note that my point-and-shoot cameras have surprisingly good zoom lenses. And the very close-range wildlife photos were taken from out of the car’s windows!

Photos #11-15 and #17 (of Black Pearl Spring with moss, lichen-covered boulder [broad view and close-up], Eriogonum, and Ross at Storm Point) by © Susan Moyle Studlar. All other photos by © Ross Wood Studlar.


Due to limited internet access and other demands on my schedule, it may be two months before my next blog post.

Posted by Ross Wood Studlar at 2:43 PM No comments: